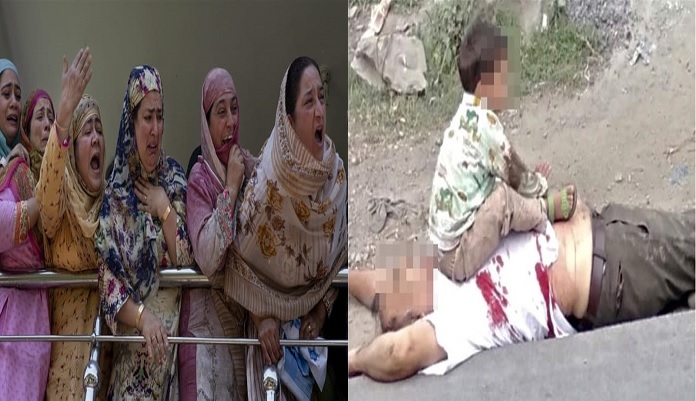 After repealing Article 370 in Indian Occupied Kashmir (IOK), a free hand had been given to Indian armed forces to arrest, torture, persecute and kill any civilian. The Indian atrocities are increasing day-by-day, and Kashmir has been witnessing the brutalities, restrictions, curfews, and killing of innocent civilians in front of their families. To subdue the Kashmiri voices, the Indian central government introduced several draconian laws, including; Public Safety Act, Armed Forces Special Power Act, Official Secrets Act, and the National Security Act, etc.  Most recently, the world has seen a toddler sitting on the chest of his dead grandfather’s body and was inconsolably crying for help; this tragic event caused outrage in residents living in Indian-held Kashmir. The heart-wrenching pictures of a small child sitting on his slain grandfather’s chest in the Indian Occupied Kashmir have sparked a new debate about rampant Indian violence. It’s not the first time of such a dreadful incident; the Kashmiri people are resisting against Indian oppression for the last seven decades, and their resistance would be continued till their independence from Indian occupation. This week, thousands of people in IOK have orchestrated a massive protest, denouncing the Indian forces for brutally killing a 65-year old innocent person named Bashir Ahmad, in front of his little grandson without any specific reason. Besides, the security forces stated that Kashmiri fighters had opened fire on them, which led to a gun-fire battle resultantly killing civilians.

According to the deceased person’s family members, Bashir was dragged and stretched out from his car by Indian forces and killed him brutally during the relentless onslaught. The Indian forces always tried to overcome their aggression by killing and hurting Kashmiris in IOK. This incident reminds us of the continuous exercise of Indian’s cruel and ruthless violence, but who cares about these innocent Kashmiris? The picture of this child and his helplessness, suppression, and blood of innocent civilians demonstrate a lot about the pseudo champions of International human rights. Despite killing civilians, the Indian forces accused the Kashmiri people, whether they’re civilians or freedom fighters, for state terrorism. In a recent tragic incident, they have blamed Kashmiri fighters for instigating people to assault Indian forces; but, these allegations are explicitly despicable and baseless. The image of a 3-year child along with slain grandfather exposed a fascist and real face of the Indian government, the wide-spread human rights violations and deliberate killings of Kashmiris acknowledged the viciousness of RSS Ideology backed by Indian central government. Another young boy was killed in the Kulgam area by Indian forces last week mercilessly, and unfortunately, he was portrayed as a terrorist to hide the Indian atrocities. On the one side, the Kashmiri people accelerated their vigorous efforts for independence movement since the imposition of Covid-19 lockdown; contrarily, the central Indian forces have also intensified their so-called counterinsurgency operations against innocent civilians. According to the Coalition of Civil Society, during this lockdown period, the Indian army conducted more than a hundred military operations in Indian-Held Kashmir, killing at least 250 Kashmiri innocent people. The world doesn’t have words to explain the grievances and subjugation of the Kashmiri people.

More specifically, after Indian unilaterally attempt to illegally annexed and seize the identity of Kashmir people, the Indian forces have unleashed and launched a new wave of atrocities upon innocent civilians. On the so-called militancy pretext, hundreds of young civilians had been tortured and killed to disparage the legitimate right of self-determination of Kashmiris but, it should be cleared that their blood wouldn’t go in vain. For the last seventy-two years, the Kashmiris have been consistently opposing illegal Indian occupation, and now, this resistance had been altered into several new strategies. The young Kashmiris have been becoming a new face of independence movement; they’re getting assistance from social media to expose the savaged and ferocious face of Indian forces that threatened and caused fear for the Indian government. Consequently, the Indian administration imposed severe restrictions in the already tormented and oppressed area to suppress the voices of Kashmiris.

The Kashmir valley is like a powder keg in the whole South Asian region; almost three wars had been fought between two nuclear power states. The Indian oppression over Kashmiris people is worsening day-by-day, and recently, obliterating the identity of Kashmiri people by repealing the Article 370 and 35A further damaged the freedom struggle of these suppressed people. The extensive magnitude of Indian brutalities, unilateral withdrawal of special status, the subjugation of Kashmir Identity, violent suppression, human rights abuses, massacre and persecution of innocent civilians, and curbing-off the demonstrations have a detrimental impact on regional peace and stability. The Indian government’s unconstitutional attempt to snatch the identity of Kashmir is a deliberate provocation of waging another war in the region, which would ultimately destabilize the regional peace. The International community should reconsider the nitty-gritty of escalating situations; otherwise, it would become too late. Besides these atrocities in IOK, the abrogation of special status also sabotage the Ladakh territorial status, and it could provoke China to take legal action against India, as they previously did. Additionally, the perpetual threat of armed conflict between three regional nuclear powers is also vivid, and India must think below the nuclear latency before taking any dismissive step.

Indian forces couldn’t overwhelmingly subjugate and oppressed the freedom struggle, and they have witnessed Kashmir’s intensive resistance for the last seventy years. Kashmiri shall not dislodge their resilient struggle against coercive strategies imposed by Indian forces and will keep resisting and countering utopian Indian hegemony. Substantially, the Kashmiri people sacrificed thousands for lives on the name of freedom, and it would be continued till their last breath. Considering the viciousness and restricted policies of Indian government vis-à-vis resilient resistance of Kashmiri civilians, the International community must utilize available resources against the extremist regime of India for peaceful resolutions of Kashmir dispute. Albeit, the combined vigorous efforts of the International community, would save humanity from this on-going pandemic. Still, it’s uncertain whether the International community would discern its sheer responsibility to protect the suppressed people of Kashmir from a permanent epidemic of Indian aggression. Let the world must know that the blood and killing of innocent Kashmiri people wouldn’t be futile and worthless; they shall keep opposing and resisting the Indian fanatical, fascist ideology, and silence of the International community till their last breath.

CAA and its implications for India and the International Reproach