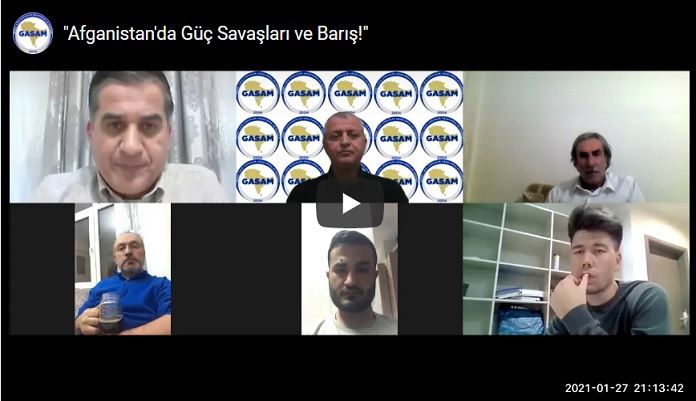 An Afghan lawmaker urged countries like Turkey, Pakistan and Iran to be more involved in ongoing peace talks between Afghanistan’s government and the Taliban to help establish lasting peace in the country.

“In the intra-Afghan talks, regional countries like Turkey, Pakistan, Iran and others that are in the game have lots to do,” Hamiduddin Yoldash from the northeastern Takhar province told an event titled Power Wars and Peace in Afghanistan, held by the Istanbul-based South Asia Strategic Research Center (GASAM) on Thursday.

Joining the videoconference meeting, Yoldash underlined that the biggest flaw in the peace talks was that regional countries were being kept out of the negotiations.

He welcomed the talks held in Qatar’s capital of Doha as a “good step” for the resumption of the second round of the intra-Afghan talks.

The intra-Afghan talks began after a February 2020 agreement between the Taliban and the U.S. that set a timeline for the withdrawal of foreign troops from Afghanistan in exchange for security guarantees.

Kabul has insisted on a permanent cease-fire, a demand so far rejected by the insurgents.

Since then, the Taliban has freed at least 1,000 Afghan security forces in return for more than 5,000 insurgents released by the government.

The two sides have been engaged in the second round of talks in Doha since Jan. 10.

Yoldash noted the prolonged atmosphere of chaos and unrest in his country and said: “In Afghanistan, we need to set out by taking ethnic and religious factors into consideration and finding a solution to them. We can never achieve success without solving these problems.”

Underlining that some of the most important problems in Afghanistan, such as poverty and inadequate education, have been increasingly causing social problems in the country, he said they also have a significant role in the internal political power balances in the country with the Afghan government “stuck in a box.”

Differences of opinion and disagreements in domestic politics have strengthened the Taliban further, Yoldash said, adding that the negotiations were not expected to conclude in the short term, though “continuity is important.”

Reiterating the need for cooperation with regional countries in the peace talks, Yoldash said, “Without Pakistan wanting it, peace can never come to Afghanistan.”

He also emphasized that a truce would be needed to establish peace.

“In this turmoil, everyone is trying to get their share of Afghanistan’s geopolitical and geostrategic position,” Yoldash said, highlighting the importance of continuing a trilateral summit between Turkey, Afghanistan and Pakistan.

“The enmity of the two brotherly countries (Pakistan and Afghanistan) and their fight with each other may cause bigger problems in the future. Intervention by countries such as Turkey would correct the situation while it has newly emerged,” he said.

These trilateral meetings aim to bring peace to the region and resolve the lingering mistrust between Kabul and Islamabad.

The eighth and last meeting of the summit was held in Istanbul in 2014.

Yoldash also called on politicians in his country to come together to discuss how to manage this crisis with common sense.