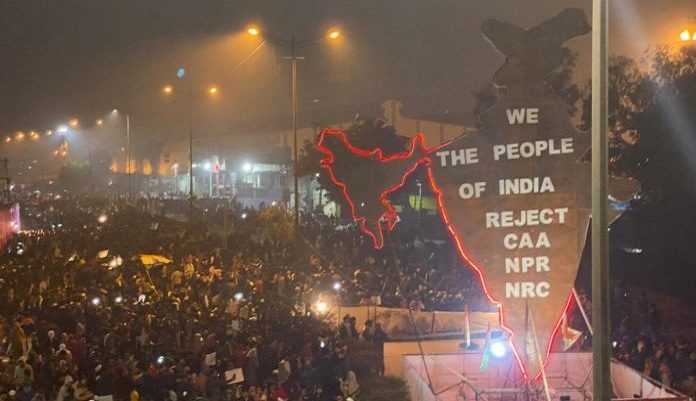 On February 4 2020, the Indian government clarified that it is still weighing in its options, on whether it will implement country-wide National Register of Citizens (NRC). This comes after more than a month, after Prime Minister, Narendra Modi in a rally in New Delhi asserted that there had been no discussions on implementing nation-wide NRC. This statement was in complete contradiction with that of Home Minister, Amit Shah, who has reiterated again and again, that NRC will indeed be implemented, despite the large protests that have rocked India since the government began discussion over the Citizenship Amendment Act (CAA), NRC and the National Population Register (NPR).

Protests – From Assam to Shaheen Bagh

Protests have been raging in India and abroad against the CAA, which was enacted into a law on December 12, 2019. The protests are also against the proposal to enact a nation-wide NRC. Protestors throughout India, view the new law as discriminating against the Muslims and the poor who do not proper access to valid proofs of citizenship. Their major demand is that the amendment to be scrapped and the nationwide NRC to not be implemented. The major concern is that the Muslim citizens of India, along with the poor may be rendered stateless by the proposed nationwide NRC in combination with the CAA. It is believed that all citizens of India will be affected by the bureaucratic exercise of the NRC, where they will have to prove their citizenship for inclusion in the registry.

The protests began in Assam on December 4, 2019 after the bill was introduced in Parliament. This was followed by protests in other parts of north-east India. The north-eastern states do not want Indian citizenship to be granted to any refugee or immigrant, regardless of their religion. They fear that it will alter the region’s demographic balance. By the middle of December, the protests had spread to almost throughout the country, mostly led by civil society and students.

The epicentre of the anti-CAA protests have been at Delhi’s Shaheen Bagh, a neighbourhood in Delhi. It is an on-going 24/7 sit-in peaceful protest led by women. The protest site is a major highway in Delhi and the protest have been going on for more that 50 days now. It has become the longest on-going continuous protest against CAA-NRC-NPR. It is a leaderless protest, which draws people from all faiths and walks of life. This protest has inspired similar Shaheen-Bagh style protests across the country, such as in Gaya, Park Circus, Bihar, Allahabad, Mumbai and Bengaluru.

This blockade by the protestors at Shaheen Bagh has become a political issue for the Delhi Legislative Assembly elections, scheduled for February 8 2020. These protestors have been used by the ruling dispensation to polarise the voters of Delhi, by alleging that they are being funded by the opposition parties in Delhi, namely the Aam Aadmi Party (AAP) and Congress. Regardless of these allegations, the fact remains that the real intent and scope of Shaheen Bagh protests, and for that matter, all anti-CAA protests are much bigger than being acknowledged by the Bhartiya Janata Party (BJP).

Almost all the protests are led by the youth, students and women. These protests have proved that the youth and the citizens of the country are much politically aware, than being earlier thought to be. The tenacity of the protests and relay-protests attest to this fact clearly. Also, the victory of the BJP under Narendra Modi in 2014 and 2019, had made many political pundits in India and around the world, to see a distinct halo of invincibility around the Prime Minister. Slowly but steadily, that aura has been dispelled by these protests. The magnitude of the protests, and the abrasive and brazen attacks launched by the party leaders in the election rallies in Delhi, definitely point out that the party has been rattled by the continuous protests.

India’s and the image of Prime Minister Modi has taken a beating with the CAA-NRC issue. With a slump in the economy, and India sliding down all the parameters of growth and development, the misplaced priority of the Modi-government on implementing CAA-NRC and the heavy handed manner, in which the protests have been tackled, has come under scanner by national and international agencies.

In its reports, the United Nations has taken a note of the excessive use of force by the security agencies and urged the government of India, to respect the freedom of expression and opinion, and freedom of peaceful assembly. The United States think-tank, Congressional Research Service expressed concerns that the CAA along with the NRC may affect the status of the Indian Muslim community. The Organization of Islamic Countries (OIC) has expressed their concern about the present situation of CAA-NRC and urged the government of India, to ensure the safety of the Muslim minority and to follow the obligations of Charter of the United Nations.  Various International Human Rights organizations like the United Nations Commission on Human Rights (UNCHR), Human Rights Watch, Amnesty International have expressed their concern over CAA- NRC and the excessive use of force used against the protestors. The protests also had an effect on the tourism sector of the country, with countries like, Canada, France, Israel, Russia, Singapore, Taiwan, US and UK issuing travel advisories for its nationals against traveling to the north-eastern states of India. The protests also led to a 60 percent decline in tourists visiting the Taj Mahal, in Agra, in December.

On February 8 2020, Delhi will vote for its Legislative Assembly. State legislative elections are always fought on local and state-level issues, and are generally different from the general elections. However, this time the Delhi elections are different, as they will be impacted by the larger contentious issues and the polarised environment of the country. After bearing the brunt from the national and international agencies, it will be interesting to see if the voters of Delhi will use their vote to verdict for or against the CAA-NRC plan of the government.

By – Anupama Ghosh, from India