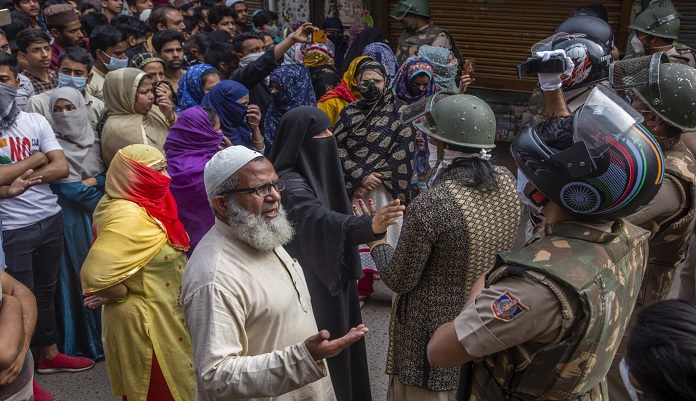 As India along with the world wages a fight against Covid19, there is another aspect in which the country is finding itself to be embroiled in.

As the number of cases in the country continues to increase, it is being complemented by the increasing and blatant marginalization of its largest minority group, the Muslims.

Many see this rising marginalization as a phenomenon that reared its ugly head since 2014. Many attribute this to the rise in power of the hard-line Hindutva Bhartiya Janata Party (BJP) and its mascot Narendra Modi. But that does not absolve India and its history of communal flares. The 1984 anti-Sikh riots, the Rath-Yatra of the late 1980s which culminated into the desecration of the Babri Masjid in 1992, the Gujarat riots of 2002 and the more recent ones in Delhi in February 2020, do point out the fractures that existed in India. For one, the communal frictions are always been seen as part of India. After all, many believe that in such a vast and diverse countries, certain social groups, regardless of their religion, have found themselves at the receiving end of much disdain. Despite this, India had also been a country that managed its role as a model-democracy in a rather unsteady neighbourhood. The country is taken as an example of diversity and culture, of rich heritage and history, of assimilation and amalgamation, of people, culture, language and religions. It is a land that signified the passage of this assimilation from the ancient, medieval to the modern era. But, increasingly, it is finding the assimilation to be replaced by marginalization.

The general elections of 2014 are seen as a watershed moment in India’s history. The paraphernalia of the elections – the sheer size of the electorate and the geographical expanse made it one of the largest elections. The fact that it replaced a government ruling for 10 years was also a major marker of the elections. The 2014 elections was fought on the slogan of ‘vikas’ meaning development, with the tagline of ‘sabka saath, sabka vikas’, which meant ‘together with everyone, and everyone’s development’. This tagline did not find itself being translated into the real world, as Modi 1.0 was marked by the rise of an acrimonious hate-filled campaign by the ruling party in the numerous state assembly elections since 2014. It was further taken to a dangerous level through the social media, a known forte of the party. The level of discourse in such election rallies, targeted again and again, the Muslim community, questioning their presence in India. Many of such derogatory comments on the community were made by ministers affiliated to the ruling party, and did not receive any reprimand from the Prime minister whatsoever.

This marginalization of the Muslim community has never been more mainstream than in the past few months of Modi 2.0, with instances of the community being singled out for hatred many times.   All these took the form of the mockery of judicial processes in the abrogation of special status of Jammu and Kashmir, the Ayodhya verdict, which failed to put any blame on the majority community for the desecration of a monument- having immense religious and historical significance for India, and through the assault on the secular character of India, through the Citizenship Amendment Act (CAA) and the National Register of Citizens (NRC).

The story of Corona Jihad

The growing disdain against its minorities broke new grounds during the covid19 pandemic. The surge in the cases in India have been attributed to the large congregation of the Tablighi Jamaat that took place in New Delhi in March. It did amplify cases in the country, but to keep on blaming the Jamaat or demonising the entire Muslim community for the surge, borders on the absurd, especially in circumstances when every report suggests that India is testing way below its capacity and requirements. The social media in India is ripe with false stories and accounts claiming Muslims to be spreading the disease in the country. Many reports suggests that hospitals in many states are not admitting Muslim patients, while in a few hospitals, there are separate wards for Muslim patients, in a bid to keep them away from the Hindu patients. Amidst the almost a month long lockdown when the economy seems to be severely affected, the false reports of the so-called corona-jihad, or falsely accusing Muslims of ‘spreading the virus’ is disrupting the means of employment and survival of many Muslim traders and vendors. The inroads that such false narrative is making can be gauged by the recent incident at Palghar in Maharashtra. A mob took law and order into their own hands and lynched three people mistaking them to be thieves, the social media foot soldiers did not waste much time in giving it a communal color, while the state ministers have categorically ruled out the communal angle, stating that the victims as well as the perpetrators belonged to the majority community.

The increasing mainstreaming of hatred and marginalization of the Indian Muslim community has now been laid bare. The world is waking up to the rising Islamophobia in the country. Earlier this week, the 57 members Organization of Islamic Cooperation (OIC), criticized the ‘growing Islamophobia in India’. The same day, Prime Minister Modi issued a statement asserting for ‘unity and brotherhood’ as the response to the coronavirus, which does not see ‘race, religion, colour, caste, creed, language or borders before striking’.

While the Prime Minister is right in asserting that the virus knows no such bounds, it is for the government and its hugely active social media followers to take the heed.

It is a known fact that politics and society are symbiotic and is a reflection of each other, it should not be taken to believe that everyone is taking the bait for the marginalization of the minorities in India. After all, notwithstanding the huge popularity Prime Minister Modi enjoys, the vote share of the party was less than 40 percent in the two elections. It means that there are a number of saner voices in the country, who have not fallen for the rising Islamophobia. They might not be heard as loudly over the din of the social media falsities, it is immensely crucial that countries and communities across the world notices and calls out the growing marginalization of Indian Muslims.