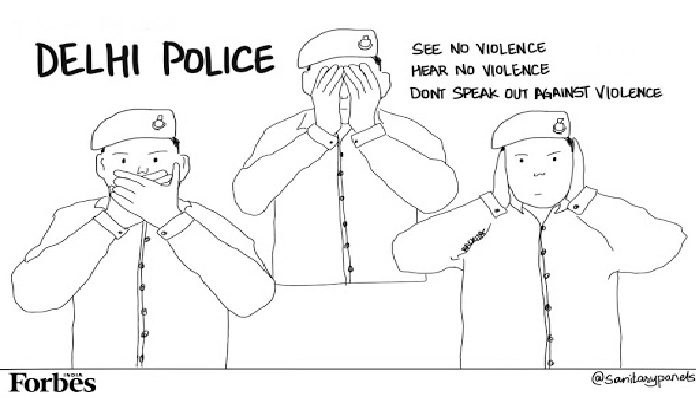 The last few days, saw the Indian capital Delhi spiral into chaos and violence. The violence and the rioting that shook parts of the city, is arguably the deadliest religious violence taking place in the capital in decades.

The death toll from the violence stands at more than 40 and is still climbing steadily. The city saw unrelenting rioting, as mobs set fire to houses, shops, businesses and even mosques, as a clear marker of India’s steady digression from its long cherished ideals of secularism and pluralism.

This violence is the immediate result of the relentless divisive speeches, that have now become the hallmark of most of the Bhartiya Janata Party (BJP) leaders. The situation in India, especially Delhi is riled with tensions, after the passing of the controversial Citizenship Amendment Act (CAA). A few days before the carnage in Delhi, and coinciding with the high profile visit of the President of the United States of America to India, including Delhi, BJP leader, Kapil Mishra threatened to remove a group of protestors, mostly Muslims, who were blocking a road in parts of Delhi. The group were protesting against the CAA and NRC. Notwithstanding the visit of the President of the USA, and the ensuing security that one expects, in the light of such a high profile visit, the police became a party in the violence. The Delhi Police has been charged with being a mute bystander,  as the instigated mob, carried out  widespread violence in Muslim neighbourhoods in Jaffrabad, Maujpur, Ghonda, Chandbagh, Babarpur, Gokulpuri, Yamuna Vihar and Bhajanpura, in broad daylight.

Modi 2.0 has flipped a new page in the history of India. The past few months have seen unprecedented turmoil and unrest on a national scale. Beginning with the revocation of the special status of Jammu and Kashmir, the verdict on the Ayodhya issue, and the recent passing of the CAA, points to the advancement of the Hindutva nationalist agenda of the BJP. With anyone, standing against the CAA and NRC being termed as anti-national, and subjected to not only ridicule and sedition, is being fostered by the government on a daily basis.

How the BJP has abetted the violence in Delhi, can be judged from the fact that, this violence was largely concentrated in areas that the BJP managed to win in the recent Assembly elections. In fact, five of the eight seats the BJP won in the seventy member assembly, fall in northeast Delhi, where the rioting took place. Also, interestingly, it was in Babrpur, one of the affected areas, that Amit Shah, while campaigning for the Delhi elections, in late January had urged the voters to press the EVM button so hard, that the ‘current’ was felt at Shaheen Bagh, the epicentre of the CAA-NRC protests in Delhi, being led by women. The role of the BJP and its leaders in instigating the mob, is hard to miss.

Amidst all the violence and carnage, some heart-wrenching stories of amity and brotherhood also emerged, which restores ones’ faith in the long pluralist tradition of India. Hindus and Muslims, neighbours for decades, came to each other’s aid and protected one another. Many of the residents, also alleged that the mob were not locals, but were outsiders, pointing to the fact, that miscreants were brought from outside the neighbourhoods to create chaos and mayhem in these areas.

The past few days were the biggest challenge to the newly elected government of Delhi, led by the Aam Aadmi Party (AAP). It will not be wrong to say, that the party failed miserably in facing the challenge. While the violence continued unabated, the Delhi government failed to act and react. The party  had asked the Delhiites, to reject the divisive agenda of the BJP during the assembly elections, a call that was responded to by the people. It is unfortunate that the people of Delhi, feel let down by their newly elected government, whose actions and reactions to the violence were quite delayed and insufficient.

As the recent incidents in Delhi, show that it is time that all the opposition parties should be working to restore the peace and security of all communities. They should also work for the people affected by the riots, the fake news that is being circulated on various social media platforms, and the disinformation propaganda. It is time, for the political parties, especially the opposition, to take the fight against the BJP onto the streets, and out of the social media.