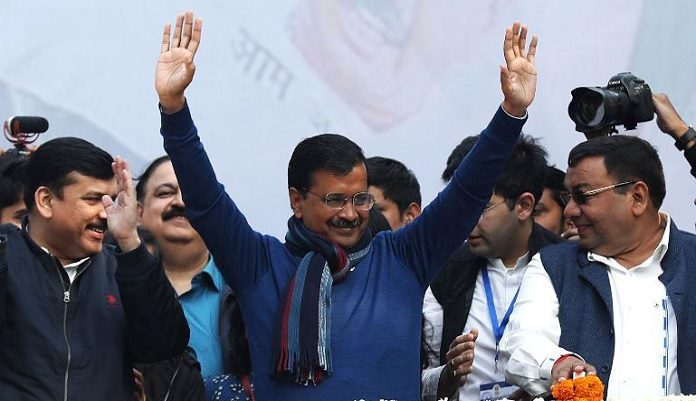 Delhi, the Indian capital held its assembly elections on February 8, 2020, and the results were declared on February 11, 2020. The fight for Delhi was between the three prominent parties, the Aam Aadmi Party (AAP), the Bharatiya Janata Party (BJP) and the Congress. The Congress party which had ruled Delhi for 15 straight years till 2013, was fighting for its survival in Delhi in these elections. AAP had swept the 2015 assembly elections, while in both 2014 and 2019 General elections, it was the BJP which emerged victorious.

The Importance of 2020 Elections in Delhi

For many political analysts, Delhi elections do not hold much significance; they usually do not see it more than a glorified municipality. But it has a symbolic importance, of being the national capital, and the seat of power.

But mostly, in 2020, it is because of the environment that the country finds itself in. Following the passing of the Citizenship Amendment Act (CAA) last month, the act along with the National Population Register (NPR) and National Register of Citizens (NRC), had been the subject of much debate and turmoil of the country. In fact, Delhi had been the epicentre of this debate, turmoil and violence, which has been unleashed in the University campuses of Jamia Milia Islamia and Jawahar Lal Nehru University . In fact, for the BJP the entire discourse of the elections, centred around the protests and protestors. Its thrust on this issue, may have made the election campaign for the Delhi elections, too divisive and fractured, aiming at pitting one-community- against- the -other.

The AAP has been ruling Delhi since 2015. And in the run-up to the election, the party highlighted its achievements, in the form of free neighbourhood clinics known as the Mohalla clinics, Delhi government-run schools, free travel on public buses for women and sharply reduced tariffs on water and electricity. On the other hand, BJP’s campaign was a divisive and polarising campaign. Focusing on terming the protests and protestors against the CAA-NRC as anti-national, the top BJP leaders did not shy away from maligning the protests and protestors, including the elderly women of Shaheen-Bagh.

It is said, that in India, the context of elections change. Voters vote differently in national and assembly elections. Taking a cue from this understanding of Indian elections, AAP steered clear of any controversy and did not indulge into any banter with the BJP, ahead of the elections, instead focusing only on its own past work and achievements.

On the foundations of its work, AAP won the Delhi elections with an overwhelming majority, winning 62 out of 70 seats. Delhi became the fifth-state, that BJP lost in a row, following its own massive victory in the General elections in 2019.

What it means- A vote against BJP?

The verdict of this election, once again underlines the fact that Indian voters, vote comprehensively on local issues, in the assembly elections. But an important point, that needs to be noted, is that, apart from this being a vote for the achievements and deliverance of promises by AAP, is that, voters cannot be isolated from the prevailing conditions of the country, especially the anti-CAA and NRC protests, taking place in Delhi. So, in a way, the vote for the achievement of AAP, is as much a vote against the divisive and polarising campaign of the BJP. If data is to be believed , then it would seem that BJP did exceedingly poorly in the seats, where the anti-CAA protests are frequent. The data also shows that AAP consolidated its hold over all seats, comprising of 40 percent of more Muslims. Therefore, such seats, like Ballimaran, Matia Mahal, Mustafabad, Okhla and Seelampur, saw the AAP candidates registering record-wins against their BJP opponents. Interestingly, Okhla which comprises as its part the famous Shaheen-Bagh, saw its Muslim candidate registering one of the biggest win by vote-margins. Again, the aspect that needs to be highlighted here is that, Okhla also comprises of a sizeable Hindu population as well. The votes margin show, that most of the Hindu voters, as well, voted for AAP, rejecting the BJP’s polarising campaign based on CAA-NRC.

While some analysts, have rightly pointed out the increase that BJP’s vote share in Delhi has seen in this election. But this election result, also puts forth the point, that the opposition to CAA-NRC is not confined to Indian Muslims, as only Muslims are not to be adversely affected by the NRC. NRC and NPR are a threat to all Indians, irrespective of their religion, and this has been brought out by this elections, in which people have overwhelmingly voted for development over religion and polarisation. While the BJP played its Hindu nationalist card, it completely ignored the matters of governance. It should make clear to the BJP, the limits of the vociferous campaign of the BJP based on Hindu nationalism, and polarisation. The BJP campaign was of misinformation and only played on Hindu insecurities to get the support for the party. The results of the Delhi elections show that the polarising campaign of BJP may help the party win a few more seats, but its sway on the majority of the voters is rather limited.