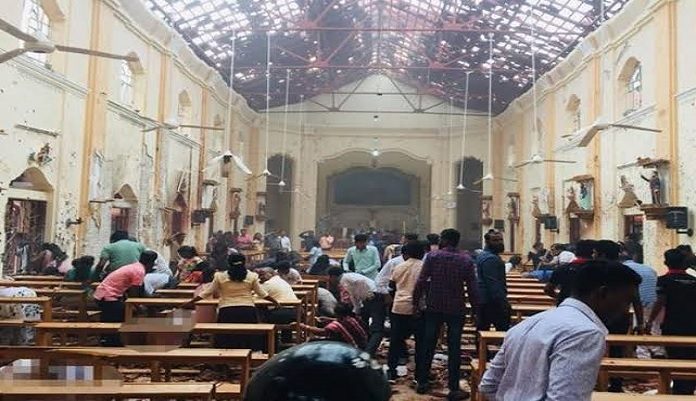 Within less than three minutes a thousand year’s cherished history of Buddhist-Muslim ethnic harmony had gone as dust in the wind.  A bosom Muslim friend turned as an object of suspicion and curse in the eyes of his Buddhist buddy.  This is how terrorists corrupt the earth after it has been set in order.  Sri Lankan Muslims, whom these terrorists claimed to be defending, has gained nothing except misery and despair.  Had Dr. Lorna Devaraja, a Christian lady, author of “The Muslims of Sri Lanka – One Thousand Years of Ethnic Harmony”, been alive, she would have wept drying all her tears.

It did not cross the imagination of Sri Lankan Muslim community that a group of backpackers of affluent family and sound educational backgrounds from its ranks would blow themselves up with innocent Church goers, holiday makers, cute children and women.  It looked like a perfectly scripted and filmed real-time horror movie in which innocent children are patted before being thrown into the inferno.  Heartless media was too generous in giving live coverage repeatedly so as to kindle fires of hatred in the minds of ordinary Sinhalese against the Muslims and depict them as monsters in human forms.

Sri Lankan Muslims are a fairly organized community.  Nonetheless, not too sophisticated as to indulge in the discussion of conspiracy theories for the purpose of peeping into mysterious forces that orchestrate acts of terrorism using radical youth as pawns. Conspirators may gain transient pleasures by killing and destruction, but they are the greatest losers when the curses of those who died come back to torment them in the long run.   One of the first brave acts the Muslim community engaged was to tipoff the hideout of the next batch of suicide bombers.  This way they averted another catastrophe of greater magnitude.  The informant was awarded lavishly by the president of the country.  A cash prize of four million Rupees for such a help is not a small gratitude in the Sri Lankan scale.   Which is better? To put your house in order first or to engage in the futile exercise of unmasking the conspirators, whose fortress is fortified from the reach of your feeble hands?  The Muslims chose the former leaving the latter for any interested party to pick.

Although not a single Niqabi (Face veil) woman was found to be involved in the attacks, the state banned Niqab in public places. Obviously this is a rash decision, in the future any Niqabi woman may rise and fight for violating her fundamental rights. Yet the Muslims did not object. The orthodox Mulla did so out of compulsion.  But those moderately balanced Muslims, who argue that Niqab is obligatory only on the wives of the Prophet (PBUH), rejoiced that the state abolished an un-Islamic custom that the Mulla adamantly enforced.

One Buddhist monk with support from opposition politicians began a fast-unto-death for political expediency and gave an ultimatum to a prominent Muslim minister and two provincial governors to resign, accusing them of having links with terrorists.  This created a huge anti-Muslim outcry across the country and fear of a sweeping riot.  This put the government of the Prime Minister in a dilemma.   All Muslim ministers took a proactive decision and resigned en masse.  This way they saved the government, averted a pogrom and caused the monk’s tamasha fail.  The darling monk all of a sudden became an object of ridicule by the Buddhist religious leadership.

The community as a whole, except for obligatory prayers, muted all its religious and cultural activities, including meritorious Ramadan activities like the Lailat Al Qadr (The night of power).  Eid celebrations were conducted in low profile.  The month of May saw the Vesak(Buddha’s birth) festival.  Muslim men and women actively participated alongside their Buddhist friends in decorating streets, temples and alms-giving functions.  We truly felt the pain of the victims; we shared their grief.  Muslim companies and individuals generously contributed for funds established for rebuilding livelihoods.

A large scale cordon and arrest campaign was unleashed; no Muslim house of brick or wood was left unransacked; keeping an extra kitchen knife or a piece of paper with even an obituary note printed on it in Arabic were sufficient proof to haul the entire family off and incarcerate for a period from fourteen to seventy days without bail.  Such small thing as reading something in Arabic in the public transport triggered bomb alert by fellow travellers decorated by the scenes of bomb disposal squads rushing with deafening siren sounds.  When the policemen were asked about the wisdom behind such boundless intimidation and arrest spree, they were speechless for two reasons.  Why is that the children of our Muslim friends engaged in this dastardly act?  Unbelievable!  Since the terrorists emerged from the Muslim community, it is collectively responsible for the consequences.  A climate of fear and insecurity was created among the Muslims.  Paradoxically, all Muslim places of worship, villages and towns were given protection, as if they were the victims.

Sri Lankan armed force is generally Muslim-friendly.  Though traumatised by its excesses, the Muslims extended their honest support for restoring law and order.  The commander of the armed forces himself publicly admitted that without this support they could not have brought the situation under control.

In unfortunate riots perpetrated by Buddhist extremists in some Muslim villages and towns, over a hundred Muslim businesses, properties, mosques and houses were destroyed.  People were driven out from mosques during Ramadan.  Fearing loss of Buddhist votes the government did little to prevent the riots, but rushed to compensate the lost properties after the riots.  The Muslims without complaining began rebuilding their businesses and properties.   This way they sent a message to the perpetrators that they are not deterred by their evil designs.  The radical monks now realise that destroying Muslim properties and businesses are totally futile as the Muslims rebuild them fairly quickly.

Racism has never been a state policy in Sri Lanka.  Had it been so, the President would not have replaced the Western Province governor, who was forced to resign by the radical monks, with another Muslim.  All post-independent governments contained racist elements within its ranks, but not to the level of influencing state policies significantly.  The country’s constitution and legal system are impartial and the Muslims have strong faith in them.

In fact most of the victims were Christians but the most irritated lot were radical Buddhist monks and their thuggish followers.  The Catholic Church and its Archbishop behaved in a very responsible manner to avert an anti-Muslim pogrom.  Islamophobes in saffron garbs, claiming to uphold Buddhist principles, rose to capitalise on the catastrophe with the “I told you so” mantra, accusing the state and the Buddhist intellectuals for not heeding to their warning about the growing Islamic radicalism in Sri Lanka. Rotten foreign Islamophobic barbs related to Hijab, Halal, Shariah, mosque building, polygamy and a plethora of other things have now become the main themes in TV talk shows and public forums.  Pathological lies against Islam and Muslims were shamelessly invented.  One such great lie is about a Muslim medical practitioner, who is a public figure.  He was accused of secretly sterilizing some 8000 Buddhist women for the purpose of destroying Buddhist population.  This is such a ridiculous claim that as a junior doctor his career could not have enough time for sterilising 8000 cases. He was thrown into the prison, but fought back and now winning thanks to the impartiality of the police department and the judiciary.  Another great lie was spread warning the Buddhists not to frequent Muslim restaurants and eateries as they serve a special kind of food mixed with some sterilization drug in a secret scheme to prevent Buddhist population growth.  Unfortunately in a country with over 95% literacy rate there are petty-minded mortals to believe such falsehoods.

A well orchestrated campaign to boycott Muslim businesses is gaining ground.  It is driven by a bunch of bankrupt Buddhist businessmen hiding in the garb of Sinhala nationalism. Muslims, less than 10% of Sri Lanka’s population, largely a business community, depend on Sinhala customers for their earnings. This campaign is an old wine which fair minded Sinhala population refused to drink on account of the honest dealings the Muslim businessmen have been maintaining with them.  However, this time around, the campaign is aggressive and intimidating the customers.   The tendency nowadays among the Muslim businessmen is trust in God and determination to face the challenges.

The Easter attack has become a free banquet for scavengers like hyena, wild dogs and vultures.  One radical monk in a press conference announced that Turkey had spent 40 million USD to groom Muslim radicals in Sri Lanka. Turkish embassy in Colombo, refuting this scandalous claim, reminded Sri Lankans, among other things that the Tsunami village of over 100 houses that Turkish Red Crescent built is situated in a 100% Buddhist village. We do not know which enemy of Turkey fed this information to this myopic human.  Moreover, Turkey is suspected of being the transit point to ISIL fiefdom, so every visitor or returnee from Turkey is being surveilled.  Sri Lankan students studying in Turkish universities and colleges are being haunted the most.  This is not a healthy situation.  Turkey, as the most successful country in the fight against ISIL, should impress upon the Sri Lankan government that it is a trustable partner for containing radicalism amongst the Muslim youth.

Donald Trump, sitting on the thrown of the world’s purported super power with his toxic ideology of hate, has become a role model for Sri Lankan hate-mongers.  With this the hitherto trouble-free Sri Lankan Muslim community is entering into a new phase of struggle against an internationally licensed Islamophobia project.  This project can take various shapes, not excluding systematic discriminations as there are scorpions and cobras hiding within the government administration, political parties, defence establishment and the judiciary.

Primarily, the huge task lies ahead the Muslim community is to put a barrier to the misinformation flood about them and their religion deluging almost every Buddhist home.   This is not through releasing Islamic leaflets or holding conferences, but through genuine interactions and living true to the faith.  Instead of wrestling with Islamophobes it is far better for them to divert their energies to produce highly qualified patriotic professionals and opinion leaders in various fields.  This is the best way to reconstruct history and build a better Sri Lanka for everyone.

Following this national tragedy the Muslims endured with a great deal of maturity, foresight, prudence and patience.  Ramadan that fell in the month of May presented an exceptional opportunity for them to remain spiritually connected with God through prayers, fasting and charitable activities; they stayed united and obeyed the collective decisions of the community’s leadership.  These are positive signs that the community is alive and vibrant.  This is the most precious investment they possess to overcome the challenges.

*Asim Alavi is a writer in Tamil and English languages and social activist. He has written extensively on social issues, leadership and revivalism.

Genesis of Terrorism in Kashmir