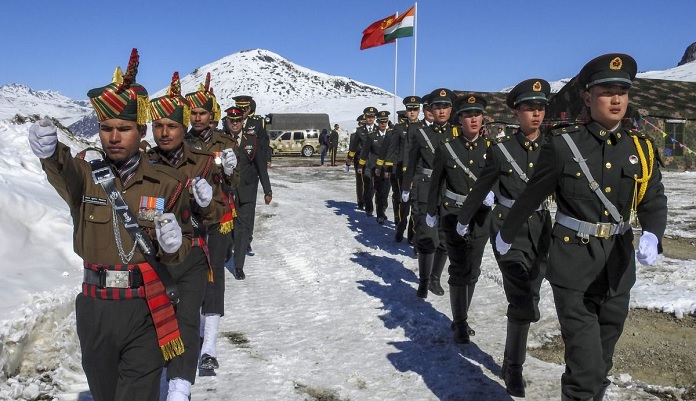 While India and China clashed at the border at the high altitude Ladakh earlier this week, what stood out was the relative lack of credible information about the goings-on on the ground. The events  on the border are still shrouded in mystery, providing much fodder to speculations.

For a month a  stand-off was being reported , with the two armies standing eye-ball to eye-ball in the high altitudes of Ladakh. However these reports were never given any official credence, while only  certain sections of the media  kept on highlighting these reports. The ensuing confusions and perceptions have now been put to rest with the clashes at the Galwan valley. They have also brought out that the fact, that the Indian government have been reluctant to share the events taking place on the crucial border with China.

Since the past month, a stand-off between the two armies have been going on. With the meetings between senior military personnel to defuse the situation, the two sides had earlier agreed to create a buffer zone between the two armies. Accordingly troops were to withdraw by a kilometre each to create an area that would separate the forces and ensure peace.  Violence ensued in the Galwan valley in the intervening night of June 15-16.

Chinese and Indian soldiers attacked each other with stones, iron rods and bamboo poles wrapped in barbed wire laced with nails. While it is still not clear what started these clashes. These clashes led to the fatality of 20 Indian soldiers.

This clash is the first time in 45 years that a military skirmish along the contested Himalayan border. While face-offs and stand-offs keep occurring on the LAC and even some instances of pelting of stones and fistfights between troops, there has been no instance of firing on the 3,488 km long LAC since 1975.

Since the clashes India and China have been engaged in a verbal volley, with accusations flying high and fast. India accused Chinese troops of ‘attempting to unilaterally change the status quo’ in the Galwan valley, and stated that the casualties could have been avoided, if China had followed the agreements made by the military commanders over the past week. On the other hand, the Chinese People’s Liberation Army (PLA) accused India ‘of going back on its word’ and violating commitments that had been reached in the discussions the week earlier. They accused the Indian army of crossing the Line of Actual Control (LAC) illegally and deliberately launching provocative attacks, trigger fierce physical confrontation between the two sides, which resulted in casualties.

There have not been much details that have been given by the army or the Ministry of External affairs (MEA) India  on the clash. All that the army sources have revealed is that the Indian Army patrol had set out to check on positions of the Chinese troops to ensure they had retreated.  It is believed that the troops were attacked by a much larger group of Chinese soldiers.

Call for an Unfeasible Boycott

Any escalation of  such military stand-off will not be conducive in the already troubled times of the pandemic and the economic slump. After the deadly face-off on the border, the Chinese foreign ministry warned India against making any unilateral movement that could further complicate the situation. A similar statement released by India pointed out that military leaders at the border were trying to negotiate a solution. On its part, it seems that India is trying to defuse the situation and showed its commitment to peace on the border with China.

A lot was expected between the bilateral relations of India and China, especially after the camaraderie that the two leaders, Modi and President Xi Jinping has shown, but it seems that it has come to a naught. As the news of the border skirmish flashed across tv screens, one major way of hurting China and ‘teaching it a lesson’ had been through the calls of boycotting Chinese goods.

The boycott of Chinese goods may be detrimental to the buying capacity of the poor Indians. Many of these Chinese products, ranging across spectrum, are evenly priced, making them much more affordable to a larger demographic. While such a boycott, can still lead the more affluent Indians, who may afford other expensive alternatives, it might not be the case for all. Any such move will in turn, have an adverse effect for India as China is India’s largest trading partner. Imports from China account for an average 16 percent of India’s total. On the other hand in India’s total exports, China’s share is just 3.2 percent. It might not have such a drastic effect on the Chinese.

In the earliest reports of the clashes, it was stated that one Commanding Officer and two jawans of the Indian army were killed. However, within hours it came to be known that, the number of soldiers killed in the incident were 20. It was also stated by the army, that no Indian soldier was unaccounted for, after the clashes. Now, three days after the clash, the Chinese have released 10 Indian Army personnel, from their custody. It is also reported that these soldiers were handed over to the Indian authorities at the LAC after vigorous negotiations. Though unharmed, this incident becomes the first time after the 1962 war, that Indian soldiers were taken into custody by the Chinese.

While the goings-on the border are critical information, but their transmission to the public can be delayed, but cannot be outrightly denied. In the times of virulent social media and fake news, more transparency is required on the part of the government, the lack of which leads to uncertainty and speculations with a detrimental effect.