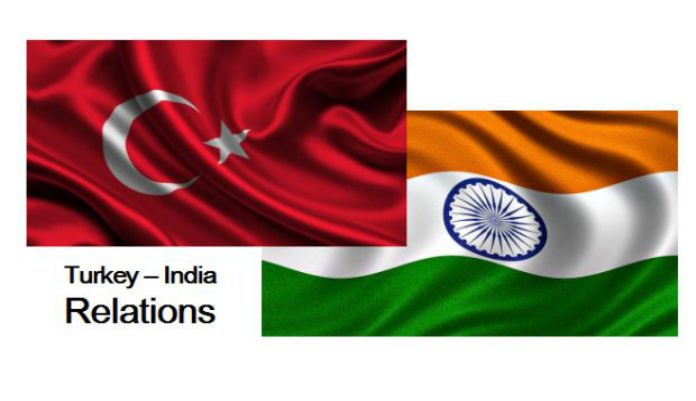 The April 30 – May 1 visit of Turkish President Recep Tayyip Erdogan to India paved the way for bilateral negotiations at the highest level after a long period of time. Former Prime minister of India, Atal Bihari Vajpayee, had visited Turkey in 2003, the first ever by any head of the Indian government in 15 years, and later Prime Minister Erdogan visited India in 2008. President Erdogan’s recent India visit came after about a decade, though the Indian Prime Minister Narendra Modi visited Turkey’s resort city Antalya to participate in the 2015 G20 summit.

We live in a different era where both Turkey and India have emerged as rising powers and they have more at stake in the management of global affairs. In the age of fast changing world order, strengthening of bilateral relations between the two countries is strategically more crucial than holding dialogues in multilateral forums.  Given below are the 10 ways, in which India and Turkey may complement each other in the emerging world order:

2- Turkey is not only the largest economy and a major power in Middle East, it has also a considerable influence in Central Asia, Black sea, Balkans and South Caucasus. With its growing economy and independent foreign policy, Turkey is playing a crucial role in shaping up the geopolitics of these vast and strategically important regions. On the other hand, India, as one of the fastest growing major economies in the world, a leading military power and world’s second most populous country, is reaching to every hook and corner of the world. The military-to-military contact in the last few years is also getting momentum between the two countries. During the last few years, bilateral port calls of naval ships have exponentially increased and more visits of military leadership are taking place. Both Ankara and New Delhi expect to realize a bilateral military agreement signed over 20 years ago.

4- The two rivaling powers of greater Middle East, Iran and Saudi Arabia, have limitations when it comes to their influence and acceptability among the Muslims in India and around the world. Due to growing sectarianism in the Middle East and its spinoff on wider Muslim world, the acceptability of these two regional powers is now limited to the adherents of their sects since religion is a mainstay of the foreign policy of both Iran and Saudi Arabia. On the other hand, Turkey is precisely viewed as a moderating power in the Muslim world; it is a modern industrialized country in Muslim Middle East unlike other powers of the region. Turkey’s acceptability in both Muslims and non-Muslim societies is much higher than that of Saudi Arabia and Iran.

5- Turkey is building some incredibly important infrastructure of oil and gas pipelines and storage facilities connecting energy producing and energy consuming countries, thus emerging as the most important transit route as well as hub of energy supplies of Middle East, Mediterranean, Russia, Central Asia and Southern Caucasus to energy scarce Europe. Both Turkey and India are heavily import-dependent countries for their energy needs, Turkey imports over 90 percent of its crude oil needs. The energy import bill of Turkey in 2015 totaled $37.8 billion. India’s import dependency on crude is over 82 percent. The country’s oil import bill totaled $70 billion in fiscal 2015-2016. Not only both the countries can jointly work in oil and gas exploration and transpiration pipelines, but as big energy importers they can influence the OPEC and other energy exporting countries both the countries may work together in reforming the global energy architecture. India’s minister of petroleum and natural gas Dharmendra Pradhan had met his Turkish counterpart and discussed the energy cooperation on the sideline of World Petroleum congress in Istanbul.

6- India and Turkey can benefit each other in formulating the new world order by cooperating in the important multilateral forums. Turkey is a key member of most of the elite export control regimes, Nuclear Supplier Group (NSG), Missile Technology Control Regime (MTCR), Australia group, Wassenar agreement and major organizations of the world where India also wants to be included. Turkey is also a key member of OECD, OSCE, Council of Europe and G 20. India formally joined the MTCR in June last year with the active help from Turkey in the consensus building for India’s entry into MTCR. A deep strategic bilateral relation will compliment both the counties on multilateral forums in today’s unsettled world.

7- India, as one of the most deserving candidates, is steadily lobbying for a permanent seat in the United Nations Security Council (UNSC) in the framework of G-4, consisting of Brazil, Germany, India and Japan. On the other hand, Turkey is persistently pushing for reforms in the UNSC by launching a campaign ‘world is bigger than five’ referring to five permanent members of UNSC.  Here both the countries can cooperate with each other for the democratization and comprehensive structural reforms in the biggest inter-governmental organization of the world.

8- Turkey as one of the most important players of 57 members, Organisation of Islamic Cooperation (OIC). India’s improved bilateral relation with Saudi Arabia and Iran has somewhat checked Pakistan’s influence within OIC in the same way better bilateral relation with Ankara will further supplement India’s stand. With its increasing influence on Pakistan Turkey can play a moderator’s role within and outside OIC on the issues related to India’s tense relations with its Eastern Neighbour.  Turkey can seek India’s help in repairing its fraught relations with Bangladesh.

9- As both the countries are emerging economies and success stories of 21st century economic development. India and Turkey can complement each other in the sectors of economy where they are strong, Turkey can benefit from India’s IT, Pharmaceutical, aerospace and nuclear energy whereas India can benefit from Turkey’s construction-contracting, Tourism and consumer electronics industry. The bilateral trade between India and turkey having reached maximum in 2012 around 8 billion USD, has now steadily declined to around 6.5 billion USD. The balance of bilateral trade hugely favours India where Turkey can compensate this huge trade imbalance by luring more tourists from India and more foreign direct investments from Indian private sector companies. In an interview with a local television channel, Turkish ambassador in India Sakir Torunlar stated that the energy cooperation between the two countries is taking shape as agreed during president Erdogan’s visit to India.

10-India’s trade volume with Africa totaled $72 billion in 2015; Turkey a relatively new entrant in Africa has the bilateral trade of USD 20 billion in 2015. Indian investment in continental Africa has reached around USD 33 billion whereas the projects undertaken by Turkish contractors has grown to USD 55 billion since the 1970s. Countries in Africa are developing their infrastructure and there is a huge scope for both the countries to jointly bid and execute mega projects in continental Africa and other parts of the world.

Suffice it to say that in a changing world where Asia is Turkey’s big priority, it is highly important that both the countries develop a long-term policy for each other, as dealing each other with an ad-hoc policy will not work in the fast changing geopolitical environment. Institutionalization of permanent policy in their respective foreign offices will help in developing a mature and sustainable bilateral relation. Thus, both the countries going by a common vision based on mutuality of interest can realize their dreams of emergence in global affairs while ensuring the most needed regional stability.