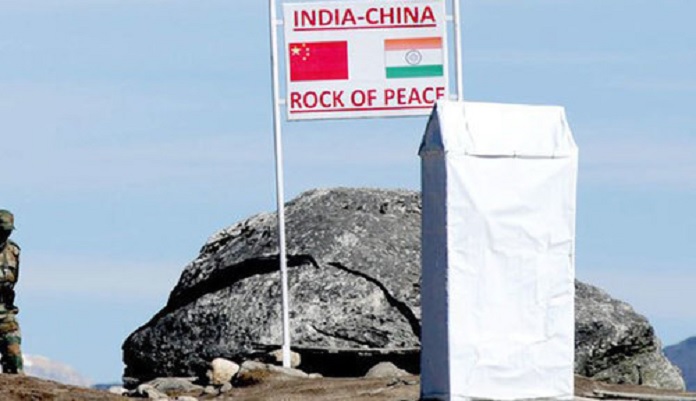 The past few weeks saw India and China caught up in a military stand-off at the higher reaches of Ladakh. Multiple reports in the media ascertained that there had been a mobilization of a significant number of Chinese soldiers and military equipment in some areas of the Line of Actual Control (LAC) in Ladakh. In certain areas of the border, India and China have different perceptions of the LAC, and as a result, both the armies try and patrol up to their LAC, often resulting in face-offs among soldiers. In the area of the Pangong Tso Lake and its northern banks, it was reported that the Chinese soldiers had in fact, moved up to the line they perceive to be the LAC. There were similar reports of Chinese deployment on their side side in the Galwan river valley area.

On June 6th, top Indian and Chinese commanders met in Ladakh, in order to resolve the on-going tensions at the India China border at Ladakh. After the meeting, both sides reiterated the need to continue military and diplomatic engagements to resolve the situation and ensure peace and tranquillity in the border areas. This meeting was followed by another Major General-level talks on June 10th. It has been  reported that the Indian side pressed for the restoration of status quo ante, reiterating that troops should move back to the positions held in April-end, before the stand-off began. The India side also sought reduction in the number of Chinese troops in the region. It has been confirmed by the army sources in the various media reports that troops have indeed moved back on either side.

So how does one look at what have been brewing at the India China border in Ladakh? Recently, a lot has been said about the growing belligerence of China in the region, as it has been embroiled in disputes with other countries in the region. China is in a tiff with Indonesia off the coast of the Natuna Islands. Even though the Natuna Islands lie outside the China’s nine-dash line, the two countries are in a conflict, over the exclusive economic zone that the islands confer on Indonesia. China falls back on its historic rights to these waters and has been sending fishing fleet into these waters. China has also been putting military pressures on the South China Sea islands claimed by the Philippines and included them in a new Chinese administrative district.

Regardless of the rising belligerence of China in the region, the point of contention between India and China may have been the changing Indian position on Aksai Chin. Disputed since decades, and mostly under Chinese control, the Indian government while abrogating the Article 370 last year, stated that Aksai Chin forms a part of India.

The strained relations of China with the USA comes at a time when India is getting closer to Washington. Over the past year, USA surpassed China to become India’s top trading partner, and it came in the backdrop of the two countries working towards further deepening the economic ties. Earlier China had its own misgivings and suspicions on the Quad of which both India and USA are members. The quad is an informal strategic dialogue between US, Japan, Australia and India, initiated in 2007 and is paralleled by joint military exercises called the Exercise Malabar. It was widely viewed as a response to the growing Chinese economic and military power. China had branded it an emerging “Asian NATO”, and beginning with maritime-centric concerns, it was gradually seen by China as an attempt to use the wider Indo-Pacific theatre to target China.

The news of the border dispute coincided with the raging pandemic and the severe economic downturn.  In India, the situation due to the pandemic is spiralling out of control, with India now being the fourth worst hit country by the virus, and the future economic forecasts are bleak. It cannot be denied that both India and China have  ‘regional hegemonic ambition and potential’. While the social media in India is abuzz about the ‘befitting reply’ the Chinese will get, no one knows for sure what is happening on the ground.

India’s border disputes can be seen in different prisms, that of changing geo-politics as well as clashing regional ambitions of India and China. Whatever may be the prism through which it is seen, it cannot be denied that India’s foreign relations have more of a tinge of advert nationalism in the recent years. The stoic silence of the Indian government on the happenings on the border with China is baffling. For a govt which has made jingoism and a narrow nationalist agenda, the happenings on the border may be seen as an discomfiture to the chest thumping nationalism. Also, when it comes to stirring up nationalist fervour among the hardcore Hindutva electorate and its supporters, the party  has seen Pakistan paying more dividends than China, as was witnessed by the stoking of the incidents at Pulwama and Balakot for electoral benefits.

A similar silence is being maintained on the dispute that reared its head recently with Nepal as well. Lying sandwiched between India and China, Nepal share an open border of about 1,880 km. while maps covering 98 percent of the boundary have been finalised, the Lipulekh pass, Kalapani and Limpiyadhura in western Nepal remain contested. In November 2019, India published a new map and incorporated some of the territories disputed with Nepal inside India’s borders. Nepal believes that there is no other agreement beside the 1816 Sugauli treaty that defined the western border of Nepal with India, and that treaty clearly states that the three areas belong to Nepal. The Sugauli treaty defined the origin of the Kali river as Nepal’s border point with India. But the two countries differ on the source of the Kali river. India argues that the exact co-ordinates of the river were not mentioned in the treaty, and with the improved survey techniques have re-drawn the map in the years since. For more than 60 years, the three areas have been under India’s control.

For India, the Lipulekh pass has security implications. And therefore, would be a difficult bargain to make, like giving up of a strategic territory bordering China. It is therefore surprising, that the Indian government had not effectively opened the diplomatic channels with Nepal to resolve the disputes.

Both the recent developments with China and Nepal have been shrouded in much mystery, with the government not disclosing the developments taking place on the ground. The chest-thumping nationalist fervour that had been characteristic of the Indian foreign policy, in the past few years have been now increasingly been kept under wraps. Therefore, questions and rightfully so, have been arising on the path Indian diplomacy with regards to the neighbourhood is taking. The Modi government had come to power promising to maintain friendly ties with neighbouring countries. Six years on, India’s diplomatic relations with the neighbourhood is in doldrums.