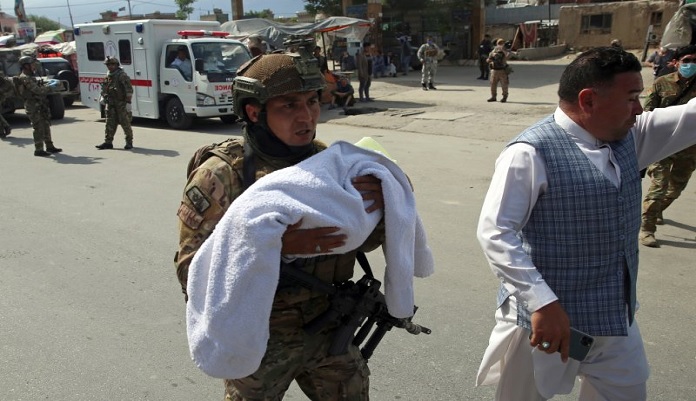 Following the Thursday’s deadly attacks on a Kabul hospital which killed 24 people, including 16 women and two newborns, and a funeral ceremony in Nangarhar, leaving at least 24 dead and 68 injured, the Afghan President Ashraf Ghani blamed the Taliban for the incidents, and directed the Afghan security forces to go “full offensive” against the Taliban and other terrorist groups.

On the other hand, the Taliban group has denied involvement in both attacks and called for an investigation in this regard.

Despite renunciation by the group, Afghan officials consider these attacks as the Taliban offensive against the Afghan national security forces and say that they created a situation where other groups can also infiltrate, and operate.

After the peace agreement between US and Taliban, it was agreed that the group and the Americans will not face each other on the battle field but rather violence will drop. In the meantime, the unwritten agreement was in place that Taliban and Afghan security forces will try not to engage in combat with each other and, thus, Afghan government announced that they will have an “active defense” rather than going on “offensive”.

In more than two months after the peace agreement, signed between US and Taliban, the group has launched more than 3,712 offensive attacks which killed and wounded around 1,450 civilians. However, the Afghan security forces conducted 1,593 defensive operations against the Taliban that resulted in killing 2,134 and wounding 1,691 Taliban fighters. 173 others have been arrested during the same period.

In last one week only, the violence has increased by 300% in the country, where 79 civilians became killed and 218 other became wounded, according to Afghanistan National Security Council.

The situation possess a lot of obstacles toward the Afghan peace process, as the commencement of intra-Afghan negotiations and remarkable reduction in violence and even permanent ceasefire are conditioned to release of prisoners (5,000 Taliban fighters in swap for 1,000 Afghan forces), as enshrined in the US-Taliban peace deal. Though, it has not happened yet.

Now, the Afghan government has decided not to release more Taliban prisoners until the group completed the release of at least 200 security forces. In return for the 1,000 Taliban fighters, so far the group  has only freed 105 Afghan security forces.

Ensuing the events, prior to any kind of probe, US Secretary of State, Mike Pompeo immediately called on both the Taliban and Afghan government to cooperate with each other and bring the perpetrators to justice. “As long as there is no sustained reduction in violence and insufficient progress toward a negotiated political settlement, Afghanistan will remain vulnerable to terrorism,” he added.

In view of Friday’s tweets by US Special Representative for Afghanistan Reconciliation, Zalmay Khalilzad, ISIS-K was responsible for attacks on a hospital and funeral earlier this week. If it is the case and as assessed by the Khalilzad team ISIS-K is capable of carrying such kind of attacks, what good could making peace with Taliban bring?

Notwithstanding, the Afghan government, a few months back, had announced the defeat of ISIS-K in Afghanistan and just a few days before, Afghan security forces arrested three key ISIS leaders including Abu Omar Khorasani, the Daesh leader for south and east area of Asia.

Given the recent activities of ISIS-K in Afghanistan, Khalilzad states that the group seeks to encourage sectarian war in this country the like of which we witnessed in Iraq and Syria, one would ask whether it is an encouragement for Afghan government and Taliban to make peace as soon as possible by any means or is it a caveat that ISIS-K will replace the Taliban and become its proxy.

There are three scenarios available in these circumstances:

First, US will join the Afghan government in its resumption of offensive operations. In this case, the deal will collapse and war will be taken up again.

Second, US will intervene and try to soften the tension, and make attempt to create an atmosphere where both sides are going back to respect the articles stated in the US-Taliban peace deal.

Third, Taliban and the Afghan government, as mentioned by Secretary Pompeo, will work together on this matter, and it will be the springboard for a lasting cooperation and a subsequent peace deal between them.

Last of all, Afghan security matter requires triggering of multilateral diplomacy with security dimension so as to get hold of a regional agreement and potent guarantee that terrorism will come to an end once and forever; because after the Taliban make peace with government and their forces put weapons down, there is, then, a risk that Al Qaeda, ISIS and tens of other terrorist group will gain more power, and, thus, the war will continue.

[i] Mushtaq Rahim, an expert on peace and conflict resolution.