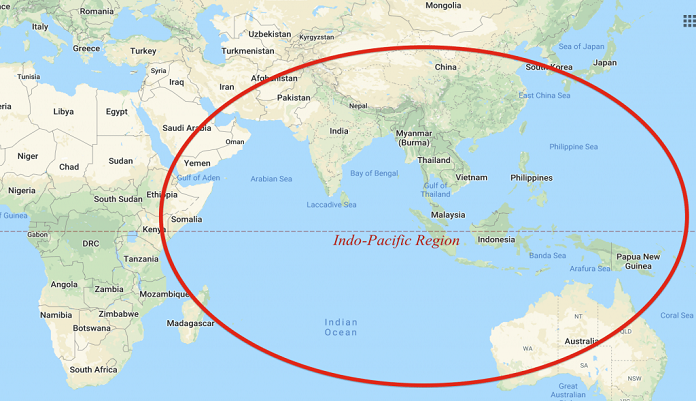 Pakistan finds itself at the horns of a strategic dilemma as the US-China rivalry intensifies in international politics. At the heart of the dilemma is the spectre of choosing between the US and China which has the intended effect of raising costs for Pakistan’s foreign policy. The article makes a nuanced case for the ‘hedging’ strategy as Pakistan navigates a transitioning international political environment dotted by the rise of China. It does so by presenting an ethnocentric critique of the American Indo-Pacific Strategy, regional trends in South Asia and how the hedging strategy serves Pakistan’s quest for comprehensive security as narrated in its National Security Policy, 2022-2026.

The Indo-Pacific strategy, as espoused by the US administration, is contained in the Department of Defense’s seminal document published in 2019. The region is defined as stretching from the western coast of the United States to the western shores of India, with its geographical definition excluding Pakistan.

The Report’s key insight is contained in how it sees the rest of the world specially, the framing of China and Russia as strategic competitors to US dominance. In characterizing China as a ‘revisionist power’ and Russia as ‘revitalised malign actor’, the United States evokes what can be termed as an ethnocentric strategic vision, a socio-psychological phenomenon in which ‘societies look at the world with their own group at the centre, they perceive and interpret other societies within their own frames of reference, and they invariably judge them inferior.’ The essential problem with ethnocentric frameworks is that they operate through the ontology of simple binaries good/evil; right/wrong; defensive/aggressive in which the good, right and defensive categories are only appropriated as an exclusive ‘us’ property while evil, wrong and aggression are attributed to ‘others’. The problem with an ethnocentric strategic vision is that it does not provide room for accommodation and compromise with ‘others’ while keeping parties on the regressive pathway of competition and conflict.

What implications and challenges does the Indo-Pacific strategy have for Pakistan’s foreign policy? The challenges and risks for Pakistan’s foreign policy have increased in the wake of rising threat perceptions between the United States and China. This constrains policy options for Pakistan in the direction of choosing one side given the fact that Pakistan-China relations remain consolidated and time-tested as opposed to the on-again, off-again Pakistan-US ties. Moreover, as the US cultivates India as an off-shore balancer against China, it is least likely to offer any assistance to Pakistan’s quest for balancing against India. On the other hand, while Chinese military assistance remains important for Pakistan, its sole dependence on China presents a risk as American sanctions on China might come into play in the future making it difficult for Pakistan to procure arms.

However, despite intensifying India-China rivalry as witnessed in border conflict along the Line of Actual Control, bilateral trade between India and China continues to expand, which at present stands at US$ 125.7 billion. For Pakistan, any successful bandwagoning with a greater power against India would entail the great power’s near complete estrangement with India, which Pakistan can then capitalize to its strategic benefit. This, as of this moment, does not transpire in India-China relations given their trade and business engagements. On the other hand, despite the tight alignment possibilities between the US and India that increased American-Chinese competition brings, India continues to maintain a foreign policy of ‘strategic autonomy’ which has seen the state noncommittal to the US when the Russian invasion of Ukraine was put to vote in the Security Council.

In the post-Cold War era, the concept of hedging as a strategy became prominent referring to a mixture of cooperative and confrontational elements that feed into a state’s national security policy. Hedging behaviour is defined as a soft alignment choice where a state avoids a binding alignment with any single major power. It does so by giving out ambiguous signals on what its shared security interests are and in the process retains the flexibility of shifting its alignment vis-à-vis major powers in the future, with the objective of reducing the source of the risk and increasing its returns maximisation.

For Pakistan, while the US remains a prospective economic risk for the latter uses its economic leverage to penalize Pakistan to pursue stated counter-terrorism objectives as evidenced in the Financial Action Task Force (FATF) grey listing, the Chinese do not present any economic compulsions. With China, the fear that resonates in Pakistan relates to asymmetric interdependence whereby the larger economy (China) procures benefits compared to the smaller economy (Pakistan) and the loss of policy autonomy. This was evident when the former advisor to ex-Prime Minister Imran Khan on commerce, textiles, industrial production and investment stated in September 2018 that the previous government had negotiated sheepishly with China and the China-Pakistan Economic Corridor (CPEC) should be renegotiated and put on hold for a year. Thus, if returns maximization is the goal towards which Pakistan’s foreign policy is directed, it is imperative that efforts are made towards constructive economic engagement with both the United States and China, despite the presence of risks.

Moreover, hedging is a preferable policy option given the heightened complexity of the Kashmir conflict after India’s August 2019 measures. Imagine if Pakistan were to choose one great power (China) over the other (US) as the China-US rivalry takes shape. This would imply in a policy sense that one great power (US) would block the other great power’s (China) move as Pakistan pursues its international diplomacy that calls for the urgent need to resolve the Kashmir conflict. This would be a big negative. In the hedging scenario whereby Pakistan maintains its leverage with both China and the US, the diplomatic initiative over Kashmir retains potency, as both superpowers are expected to remain engaged on the thorny Kashmir question. As to the question of Pakistan’s leverage, this is most likely to be reaped not from its geo-strategic location or the conventional deference to traditional security but the prioritization of economic security and what it can offer to the international community with respect to its economic potential. This requires, as the hedging strategy suggests, that Pakistan’s ruling elites make determined efforts towards political stability and economic growth and development.

Pakistan cannot do much about the Indo-Pacific region as it takes the shape of a great power rivalry between the US and China. Systemic pressures from an anarchic international system and distribution of capabilities are elements that Pakistan does not control nor the weaponised interdependence at play between the US and China. What it can control is to mediate systemic pressures by engaging in a hedging strategy that maximises its quest for economic security by leveraging its relationship with both the US and China to its advantage. A second challenge is putting its internal house in order and advancing political stability. Although terrorism is invoked as an argument for Pakistan’s economic losses, political instability has been a far more potent challenge. Political stability is instrumental in achieving economic development, growth and prosperity which then provides the building block of the hedging strategy that is autonomous with respect to great powers and open to the rest of the world.