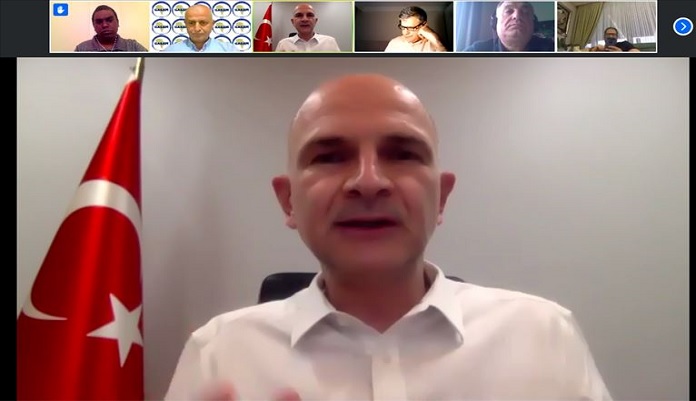 Turkish ambassador to Bangladesh called on Turkish businessmen to invest in the South Asian nation that has huge domestic market and hardworking manpower.

Speaking from Dhaka at an online seminar on Political and Economic Relations Between Bangladesh and Turkey, Ambassador Mustafa Osman Turan said: “Those who invest here [in Bangladesh] will not regret.”

Underlining the relatively cheaper domestic workforce in Bangladesh and “hardworking and disciplined manpower thanks to the young population,” Turan said the country is a perfect place for Turkish businessmen and investors.

With a population of around 165 million, Bangladesh “has a large domestic market, free trade agreements with many countries, privileges to sell duty-free goods to Europe and Western countries thanks to its status of least developed country, constituting important advantages for businessmen who do business here,” he added.

He was addressing Turkish businessmen, parliamentarians and expat Bangladeshis in Turkey at the event hosted by Cemal Demir, head of Istanbul-based South Asia Strategic Research Center (GASAM) on late Wednesday.

“If we understand Bangladesh better, if we get to know this country better, if we can comprehend the proximity of these two countries, we can explore more opportunities.

“Although we are not geographically close, this country [Bangladesh] is very close to our [Turkish] people on the basis of cultural and historical deep-rooted relations,” he said, citing the Bangladeshi people’s financial and moral support during Turkey’s War of Independence in 1919-1923.

Speaking at the event, Ekrem Celebi, head of parliamentary friendship group between Turkey and Bangladesh, also echoed Turan, adding that the Ottoman Empire and Turkey “always approached with a sense of brotherhood and consciousness” to the South Asian region.

Highlighting the large number of young generation in both countries, Celebi said he was optimistic about the future of these two nations.

“I believe that COVID-19 would have a positive contribution to the economies of developing countries,” even though the pandemic has negative effects on the global economy and the job sectors, he argued.

Celebi said the trade volume between Ankara and Dhaka will be raised from its current level of around $1 billion despite the global virus outbreak. “And this COVID-19 will be beneficial [for both countries] thanks to their young population.”

The ambassador said there is a plan for establishing a Turkish exclusive economic zone in Bangladesh.

“In this respect, we have very serious potentials ahead of us,” he added.

He also touched on strategic relations, particularly in the military and defense sectors, and said: “Our relations [in these sectors] are also very good. So, despite some ups and downs in political relations in the last decade, Bangladesh knows that Turkey is always a brotherly and friendly country. This is taken into account before any strategic decision is taken. Important decisions are not affected by daily political events.”

“We have a lot of work to do here, I think there is a lot of potential to make our ties even stronger.”

On political and people-to-people relations, he said that Mustafa Kemal Ataturk, the founding father of Turkey, and Turkish President Recep Tayyip Erdogan are very popular among Bangladeshi people.

He voiced hope that the D-8 leaders’ summit — scheduled to be held in Dhaka at end of May but postponed due to COVID-19 pandemic — be organized in this year, with the participation of Erdogan along with other leaders from the member states of the bloc.

“Our relations in economic, cultural and military fields, as well as the trade and business sectors, will continue to develop further in the coming period.”

Turkey maintains its support for Bangladesh during the pandemic as the country distributed aid packages to 4,000 Bangladeshi families.

“I hope that we can help Bangladesh with a military cargo plane carrying medical aid,” he said expressing his desire, and added that he requested it from the Turkish Health Ministry.

“If this happens, it would be a great support for the people of Bangladesh,” he added.

Turkey has sent medical aid to more than 80 countries since the beginning of the coronavirus pandemic.

Ankara is one of the biggest supporters of Bangladesh on the Rohingya refugee issue as the country has provided both diplomatic and humanitarian support in this regard.

During the COVID-19 pandemic, a Turkish field hospital in the refugee camps — home to nearly 1 million Muslims fleeing the state persecution in Myanmar — in the southern Bangladeshi district of Cox’s Bazar is the only facility which continues to provide healthcare for the vulnerable community.

“We are planning to establish an isolation center near the field hospital,” he added.