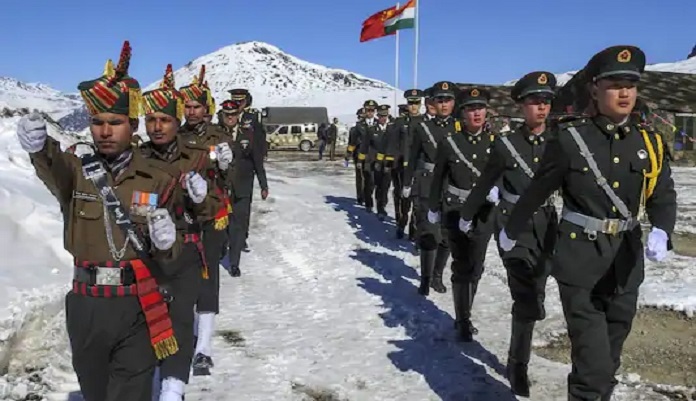 In the high reaches of the Himalayas tensions surround the relations of the two Asian neighbours- India and China. The strains in the relations began a few weeks back in the strategically important Himalayan reaches in Ladakh.

Reports continue to pour in of both the countries moving in heavy equipment and weaponry including artillery guns and combat vehicles to the disputed region in Ladakh. The tensions in the region began when a sizable number of Chinese army personnel entered into the Indian side of the de-facto border in early May and have been camping in Pangong Tso and Galwan Valley since then. The Indian army objected and demanded their immediate withdrawal for the restoration of peace. It is believed that the Chinese army has also ramped up its presence in Demchok and Daulet Beg Oldie, two areas with a history of skirmishes involving the two countries. China has also placed its opposition to India laying a key road in the Finger area around the Pangong Tso Lake besides the construction of another road connecting the Darbuk-Shayok-Daulet Beg Oldie road in Galwan Valley. The road is expected to boost India’s capability to move men and material rapidly in case of a conflict. On its part, the Chinese believe that the Galwan Valley region is a Chinese territory and it is India which has forced its way into the Galwan Valley.

This stand-off between the two Asian neighbours is not the first, and is in fact, in a series of such stand-offs that have taken place over the past six decades, the most recent being the military stand-off at Doklam in 2017. These repeated tensions are as a result of the long boundary disputes  between the two countries, which even after decades remain unresolved.

India and China share a border more than 3,440 km (2,100 miles) long and have overlapping territorial claims. It is widely known that the  border patrols of both the countries come face to face at many points.  A poorly  demarcated Line of Actual Control (LAC)  separates India and China. The raging dispute regarding the LAC can be easily understood by the fact that, it is considered to be 3,488 km long by India, while the Chinese considers it to be only 2,000 km long. It is divided into three sectors- the eastern sector which spans across Arunachal Pradesh and Sikkim, the middle sector in Uttarakhand and Himachal Pradesh and the western sector in Ladakh. While there are minor disagreements regarding the positions on the ground in the eastern sector, it is the western sector, that Ladakh where India and China finds the most disagreements.

In 1959 China maintained that the LAC consisted of the McMohan Line in the east and the line up to which each side exercises actual control in the west. After the 1962 war, it was claimed by China that they had withdrawn to 20 km behind the LAC of 1959. India has consistently rejected the concept of LAC in both 1959 and 1962. India’s rejection had been that the Chinese contention was a disconnected series of points on a map that could be joined up in many ways. India maintained that the line should be based on actual position, before the Chinese aggression in 1962, and believed that any vagueness of the Chinese definition left it open for China to continue to alter it on the ground by its military.

The LAC, therefore  in reality, remains a concept, and is in no way agreed upon by the two countries, neither delineated on a map, nor demarcated on the ground. The differences in the opinion regarding territory can also be understood by the fact that, last year when India abrogated the special status of the state of Jammu and Kashmir, Ladakh was re-drawn as a separate Union Territory. This new federally- administered Ladakh included  Aksai Chin, an area claimed by India but in  reality, controlled by China. China described this as unacceptable and undermining the regions’ sovereignty and consequently raised the issue at the United Nations Security Council (UNSC).  The Aksai Chin area located further east of Ladakh is strategically important for Beijing as it connects its Xinjiang province with western Tibet.

The current stand-off is happening at some strategic areas that are immensely significant  for India. Pangong lake is critical for the defence of Ladakh. According to Indian Military thinkers and experts, the strategic valley of Shyok and Nubra may even provide the Chinese access to the Siachen.

When seen within the larger scope of bilateral ties, the repeated stand-offs between the armies of the two countries point towards the rapid deterioration in bilateral ties and the emergence of an enduring rivalry. India sees a greater outlay of China, through its increased operations in the Indian Ocean Region, increasingly interfering in border states such as Nepal and Bhutan, and deepening its ties with Pakistan, through the Belt and Road Initiative. As such the India China border dispute could be indicative of a larger strategic shift and a hint of China’s foreign policy becoming more assertive in the future.

In India the details of the going-on at the disputed border remains engulfed in mystery. Numerous unauthenticated leaked videos and images show incidents of violence and altercations between the two armies along the LAC. The reports of purported offers of mediation offered by US President Trump have been negated by India. Currently, India finds itself preoccupied at many fronts, with the Covid19 pandemic India finds itself as the most affected country in Asia, its economy is in doldrums and border disputes have emerged in the past few weeks with a supposed close-ally Nepal. As India finds itself embroiled in one border dispute after another, with its neighbours, it would be interesting to see how this spans out with an increasingly belligerent China.