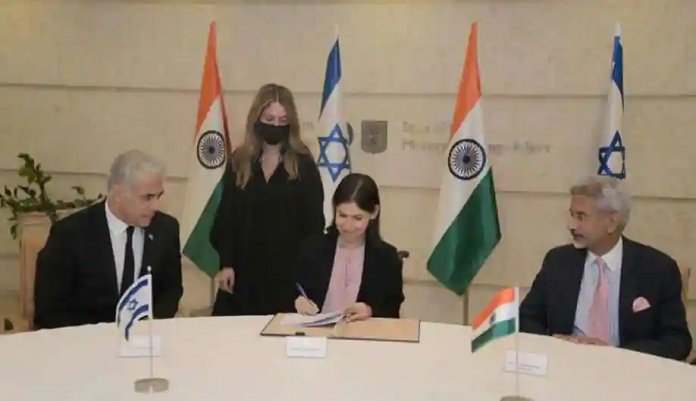 India and Israel announced the resumption of negotiation of Free Trade Agreement (FTA) starting November 2021 to be concluded by June 2022.[1] This is the first time the two have declared a definite deadline to negotiations which first began in May 2010 and that have had eight rounds of discussion till 2011. On his part, Alternate Prime Minister and Foreign Minister Yair Lapid stated, the FTA will be “finalised as fast as we can” in the interest of both the countries and business communities. Adding, “I am looking forward to deeply strengthening friendship between our countries, he said, describing India as “one of our most, not only a strategic partner but also a friend.” “We see India as an important ally for many years. India also brings new opportunities for cooperation. The two established diplomatic relations in 1992, focusing on bilateral relations on economic, defence and people to people contract opening air links promoting tourism and filming Bollywood movies.

The urgency of FTA between the two stems from growing annual trade by US$ 5 billion and expected to double with the agreement. India is the third largest Asian trading partner to Israel and tenth among other partners. Excluding defence, bilateral trade stood at US$ 4.52 billion in 2014 beginning in 1992 at a modest US$ 200 million mainly selling diamonds. The focus of the FTA would be on areas like information and Green technologies, biotechnology, defence, agriculture, water. India Pavilion at Dubai 2020 showcase well known Israeli technology harvesting water from air. Business communities in both countries would be encouraged and mobilised to support these types of exchanges. Cooperation in the defence sector is expected to continue to be robust. During 2002–07, India bought US$5 bn worth of defence equipment from Israel, whose investments in India have grown to US$3 bn. Total defence trade between the two countries is worth more than US$ 9 bn. Moreover, there is further possibility for high-tech cooperation such as in space technology and agriculture. Highlighting the Israeli perspective, Efraim Inbar, Director BESA expressed his delight that India-Israel relations are conforming to the realpolitik equation in international relations. Israel is keen to incorporate Military exercises into defence cooperation since Israel has a growing interest in the Indian Ocean Region (IOR). India, Israel and the UAE have also signed their first ever trilateral pact initiated by the International Federation of Indo-Israel Chambers of Commerce (IFIICC) through which an Israel-based company, Ecoppia, is producing an innovative robotic solar cleaning technology in India for a landmark project in the UAE. Ecoppia, is an Israeli world leader in robotic cleaning solution for solar with its manufacturing base in India and over 2,700 MW of global projects. There is further possibility for high-tech cooperation such as in space technology. It was suggested that an Asian Security or defence alliance comprising India, Israel, South Korea, Japan and Australia could work together to deal with issues including missile defence and piracy.

Israel has also joined the International Solar Alliance (ISA), a global initiative that India has spearheaded, with Jaishankar and Israel’s Energy Minister Karine Elharrar signing on the agreement. “First of all let me say what a great pleasure it is to see Israel joining the international solar alliance. I think you bring a lot of value to the table and as we approach COP 26, it is very important in our growing agenda and green road, green economy, Jaishankar said as welcomed Israel as the newest member of the ISA. The Association seeking to harness the power of the Sun to control pollution and lessen carbon footprint, is an initiative of Prime Minister Modi and is said to have already brought about 80 countries into its fold. By joining the ISA Israel would advance solar energy and contribute to global climate change effort and promote green solutions. It will also give Israel the chance to contribute its knowledge and experience to the organisation.

The two countries agreed to recognise mutually covid vaccination to promote people to people friendship. In 2014, 40,000 Indians visited Israel while India is a favourite tourist destination, especially for Israeli youth. In 2010, nearly 50,000 Israeli tourists visited India.  Other area of cooperation is in the area of academics, one issue constraining better relations between Indian and Israeli academics is funding for joint collaboration and research which public -private cooperation would be aimed at to solve. Israel announced invitation to scientific STEM conference for women in November 2021.

The decision of FTA and closer relations with Israel is a marked shift in Indian foreign policy towards Palestinian cause and recognising two state solution. Traditionally, India was pro Palestine where Indira Gandhi shared open affection for Yaseer Arafat and support in various forums. However, the current ideological change and party in Delhi, a clear but different direction is emerging. India’s evolving position was observed in the mixed messaging, in the United Nation Security Council meeting to stop the bombing of Gaza and hold ceasefire.  India’s Permanent Representative to UN, Ambassador TS Tirumurti delivered the remarks balancing India’s position vis-a-vis Israel and Palestine amid the ongoing conflict between the two sides, stating, “The events of the last several days have resulted in a sharp deterioration of the security situation, while also reiterated India’s strong support to the just Palestinian cause and its unwavering commitment to the two-State solution. The ambassador also stressed India’s strong condemnation of all acts of violence, provocation, incitement and destruction. In current position, the crucial point missing was East Jerusalem as the capital of future Palestine, a strongly held earlier position recognising the two-state solution. In the latest statement, the relationship between India and “the region” was traced to 800 years old history of Muslim Sufi saint Baba Farid meditating in Jerusalem and the Muslim Philanthropic (waqf) guest house forgetting the buried Khilafat leader Shukat Ali in holy Masjid Al Aqsa, a contemporary of Gandhi.

The other implication is how will the FTA define the occupied territories and would Palestinian authorise be considered for discussion? Under US Israeli FTA Egypt is allowed to market products under Israeli industrial zone provided 10 % of Israeli input are shown to gain duty free status. West Bank and Gaza too fall under the same agreement and Jordan until 2011 when it signed FTA independent of Israel. So far the existing arrangement fail to recognise human right issues of Palestinian. After recent Gaza bombing and media campaigns a debate on Israeli occupation has put pressure on trade and boycott of product, Google employees seeking clarification from company on the agreement the company has to avoid misuse since the end user of services was IDF. The same can be expected when the agreement comes for ratification in the Indian parliament for discussion and opposition party could seek clarifications or delay.