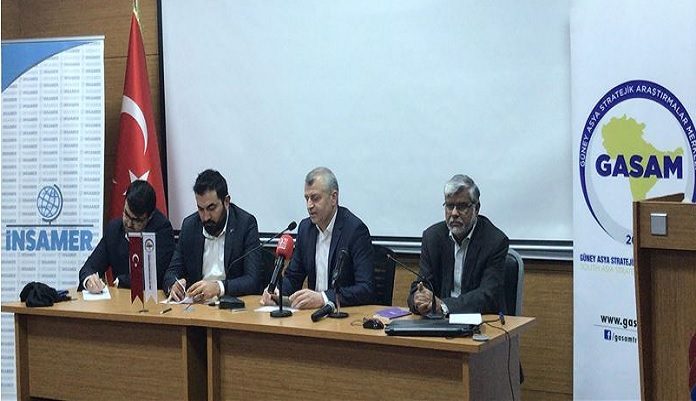 India’s controversial citizenship law, which many believe discriminates against Muslims, discussed at a panel discussion in Istanbul on Saturday.

The discussion was moderated by GASAM President Cemal Demir, and brought together Hayati Unlu, a GASAM expert, and Resul Demir, chairman of the International Refugee Rights Association (UMHD), as well as Abdullah al-Ahsan, a professor at the Department of Political Science and International Relations at Istanbul Sehir University.

India has been witnessing extensive protests against the law since it was cleared by the country’s parliament and received presidential approval on Dec. 12.

An expert with GASAM, Unlu highlighted ongoing protests against the citizenship law in India.

“When the young people crowded the squares incredibly, this [action] in a way encouraged everyone who were hesitant whether to support it or not,” Unlu said.

“We have seen that people of all ages or beliefs somehow support the protests by getting inspiration from these young people,” he added.

Underlining the importance of support by the young people, Unlu said: “I think the youth in India should give the same support for the Kashmir issue, too.”

Last year in August, India scrapped special provisions in the constitution, downgrading the status of Jammu and Kashmir into two centrally administered Union Territories (UT), thus putting the two territories under its direct rule. Kashmir is held by India and Pakistan in parts but claimed by both in full.

“Until now in India, there was a system which every segment of society from Muslims to Hindus, from Sikhs to all other segments, were part of the nation, but now when you try to define the nation only through Hindus, you put dynamite at the root of the whole system,” Unlu added.

Potential wave of migration in India

For his part, Resul Demir said that their organization mainly deal with people who had to flee their countries.

People from Syria, Afghanistan and Tajikistan as well as other countries are applying to them for help: “We have not had any applicant from India, except Kashmir,” he added.

“We see India’s current conjuncture as the beginning of a potential wave of migration,” he added.

“We observe that what causes migration in other countries is already beginning in India,” he said.

Demir also called on the UN to stop human rights violations in the region.

Meanwhile, Abdullah al-Ahsan gave detailed information on Muslim presence in India as well as the situation under the British colonization.

The deal was reached at a trilateral meeting on the sidelines of the 74th session of the United Nations General Assembly in New York last September.

“In the last UN General Assembly meeting, Turkey, Pakistan, Malaysia, they all agreed to hold a summit conference to discuss the Muslim issues, because the Muslim organization representing all Muslims, the OIC [Organization of Islamic Cooperation], is not delivering,” he said.

Founded in 2004, GASAM provides “unbiased and objective information about the historical, political, military, economic and sociocultural structure and strategic and geopolitical balance of South Asian countries — Afghanistan, Bangladesh, Bhutan, India, Maldives, Nepal, Pakistan, and Sri Lanka,” according to its website.