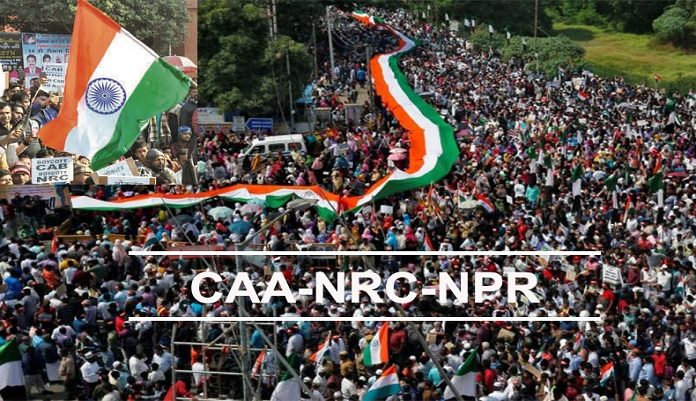 Citizenship Amendment Act (CAA) 2019 has been passed by the Indian Parliament in December 2019. It amended the Citizenship Act of 1955 by providing citizenship for Hindus, Sikhs, Buddhists, Jains, Parsis and Christians as religious minorities, who fled persecution from Pakistan, Bangladesh and Afghanistan, before December 2014. However, this act conveniently left out similar provisions of citizenship being provided to Muslims. This act is seen as one of the first instance, when religion is being overtly used as a criterion for citizenship under Indian Nationality Law, in the process undermining the secular character of India.

The exclusion of persecuted religious minorities from other neighbouring countries like Sri Lanka and Myanmar are rather questionable. Further, the government states that Muslims are not persecuted in countries like Pakistan, Afghanistan and Bangladesh, as they have Islam as their state religion. This is certainly not correct, as certain Muslim groups like the Hazaras and Ahmadis have been traditionally persecuted in these countries. To leave these communities out, while providing citizenship to others, seem an overtly discriminatory act on the part of the Indian government. The amendment also relaxed the residence requirement for naturalisation of these migrants from 12 years to 6 years. According to the Intelligence Bureau of India, the immediate beneficiaries will be 31,313 refugees. Out of them, 25,447 are Hindus, 5,807 Sikhs, 55 Christians, 2 Buddhists and 2 Parsis.

The triad of CAA, NRC and NPR

Also, The major concern about the CAA is also that it is not isolated. It will affect Indian citizens across communities and regions, when put in tandem with the National Register of Citizens (NRC) and National Population Register (NPR).

National Register of Citizens (NRC) is a register of all Indian Citizens whose creation is mandated by the 2003 amendment of the Citizenship Act 1955. NRC has been done in the state of Assam, and the government plans to implement it for the rest of the country in 2021. National Population Register (NPR) is a list of all the people residing in India and includes both the citizens and non-citizens. It is stated that the NPR is the first step towards the creation of the NRIC (National Register of Indian Citizens) by verifying the citizenship status of every usual resident. Residents of a locality living there for at least six months with plan to continue their residence for another six months or more are included into the list of NPR. According to the Citizenship Rules 2003, the centre can issue an order to prepare the NPR and create the NRC based on the data gathered in the NPR. According to it, the local officials would then decide if the person’s name will be added to the NRC or not, thereby deciding his/her citizenship status.

In 2010, the NPR was created for the first time with the names of 119 crore residents of India. This data was further updated in 2015 by linking it with biometric information from Aadhaar (it is a 12 digit unique identity number that can be obtained by residents or passport holders of India, based on their biometric and demographic data) database. The NPR planned for 2020 will also include more details such as the place of birth of the parents, last place of residence and the serial number for official documents. It is believed that the Indian government will use the list to mark people as doubtful citizens after which they would be asked to prove their citizenships.

On December 24 2019, the Union Cabinet approved Rs. 3,941 crore ( US$550 million) for updating the NPR, making it one of the first steps in implementing the NRC. It is believed that between April 1 2020 and September 30 2020, the NPR will be updated. An enumeration will be carried out throughout the country (except Assam) by visiting every house for the “collection of information relating to all persons who are usually residing within the jurisdiction” of the local registrar.

The stated objective of the entire exercise of NPR and NRC, for which the CAA is an integral part, is to make a list of Indian citizens. Such lists of Indian citizens have already been enumerated in the form of electoral rolls (voter ID cards) and Aadhaar cards. The criterion of religion further adds questions on the motives of the government. In such an extensive exercise of providing birth and property certificates and papers, dating back to generations, will be difficult to furnish for the majority of Indians. While the rich and the affluent, will be able to traverse the bureaucratic pressures, it will be the poor, and the marginal sections of the society, which will bear the brunt. Further, with the government seen as pushing its hardcore Hindutva narrative, it is no surprise that the Indian Muslims are feeling apprehensive about the entire exercise.

Also, over the recent years, India had been a bright spot in the region of South Asia as well as for the global economy. However, it has steadily witnessed a huge downturn over the past year. Unemployment rate has touched its highest in 45 years and the economy is growing at its slowest pace in a decade. At this point in time, spending US$550 million on an exercise like the NPR which is expected to cause only mayhem and divisions in the Indian secular fabric, is a questionable proposition.

Since the government has pushed through CAA, all the major Indian cities have been witnessing huge protests. For more than a month now, the government has openly demonised the protests and the protestors against CAA and NRC as anti-Indian and anti-nationals. The government has resorted to the use of police force to quell the protests, quite brutally, especially in university campuses. Also interestingly, the brutality of the police force have been severe in the states which are ruled by the Bhartiya Janata Party (BJP) and in Delhi, where the police is under the direct command of the Home Ministry.

Various people across the country have petitioned the Supreme Court against the CAA. Many of these petitioners included the Indian Union Muslim League, Congress leader Jairam Ramesh, Rashtriya Janata Dal (RJD) Manoj Jha, Trinamool Congress MP Mohua Moitra and AIMIM leader Asaduddin Owaisi. They have challenged the constitutional validity of the CAA, saying that it violates the fundamental Right to Equality. However, on January 22 2020, the Supreme Court of India refused to stay the CAA, without hearing the Centre and gave the government four weeks to respond to petitions challenging the constitutional validity of the law.

The government has now four weeks to respond, while the Home Minister has categorically stated that the government will not back out from its implementation of NRC and NPR. The protestors have also made it clear that the protests will continue, till the government does not take CAA back. It will be interesting to see who pulls back and how, and if 2020 will see the secular and democratic character of India intact.

By – Anupama Ghosh, from India