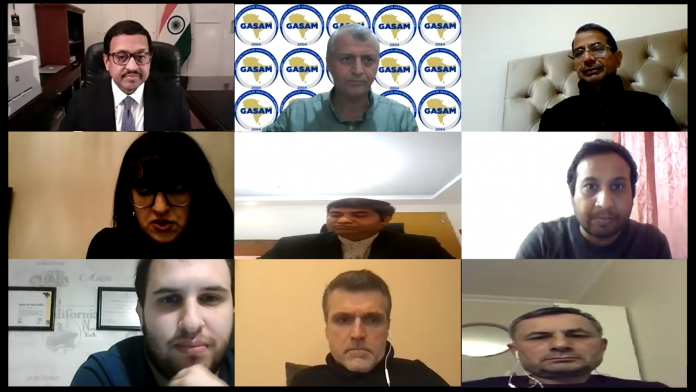 The Indian ambassador to Turkey Sanjay Panda called for “course correction” in bilateral relations for “larger goals” of the two G20-member countries.

Addressing a virtual meetup hosted by Cemal Demir, who leads the Istanbul-based think-tank South Asia Strategic Research Center (GASAM), on Wednesday, the Indian envoy said any bilateral relationship has to be “seen in its totality.”

“The perception [about India-Turkey relations] is shaped by a false narrative… you cannot have that narrative blocking this relationship,” he said, alleging: “Turkish media has also fallen victim to this false narrative.”

Referring to his recent meeting with Turkish parliament speaker Mustafa Sentop, Panda said: “We cannot be on the same page on every issue but that doesn’t mean we cannot move forward.”

The envoy said Indian investors are waiting to “come and invest in Turkey,” given the “right environment.”

Praising a Turkish company for constructing a tunnel in India’s state of Himachal Pradesh, the envoy described it as “a remarkable job that makes us proud.”

Without naming anyone, Panda said: “Two countries of the stature of India and Turkey, somehow, have missed the larger picture, [and are] caught in certain issues, not looking at this bilateral relation as standalone relation, which should stand on its own merit.”

“We are missing the track… sky is the limit… what we have attained is just tip of the iceberg,” the Indian envoy said, referring to over $8 billion annual bilateral trade. “Turkey and India have a deep historical, civilizational and cultural connect.”

He said India has always considered Turkey a friendly nation with which it shares the attributes of democracy, secularism and rule of law. “Mustafa Kemal Ataturk’s name and his legacy hold a particular appeal for every Indian,” he said.

“Located at the crossroads of Asia and Europe, it is geopolitically an important player in a volatile region, and economically, as a hub for third country exports, particularly as a stepping stone into the EU market,” he said.

He said the two sides have to “optimize this potential for multifaceted cooperation across a wide spectrum, ranging from trade and investment to defense and high technology.”

Referring to bilateral cooperation at multilateral forums, Panda maintained: “There is convergence of views on global issues, and have generally supported each other on issues of mutual interest.”

“Turkey joining an Indian initiative, the Coalition for Disaster Resilient Infrastructure, last week exemplifies our collaboration for a common cause,” he added.

On the challenges against multilateralism, Panda called for cooperation between Turkey and India for “bringing about necessary reforms at the UN, especially the Security Council, to make them relevant to contemporary realities.”

The Indian envoy said the two countries are “victims of terrorism, including cross-border terrorism.”

Urging non-interference in the Jammu and Kashmir dispute, the Indian envoy said: “India-Turkey relations have been hostage to some misconception about history based on a wrong narrative crafted and propagated by vested interests. Such narrative also included giving color of religion to a matter, namely Jammu and Kashmir which is wholly internal to India.”

“That should be respected,” he insisted.

“How can one gloss over the armed aggression against Jammu and Kashmir in 1947 which is the root cause of the problem,” he claimed, alleging: “Continued cross-border terrorist activities cost the lives of over 42,000 innocent Kashmiris.”

Panda said: “No stones are left unturned to reinforce this false narrative through diverse means, such as raising the matter at every conceivable multilateral forum, dragging the subject to seminars and conferences irrespective of the subject under discussion, instigating public, organizing public demonstrations even in third countries causing law and order problems, and even by the sponsorship of terrorism.”

“Ties can certainly be put back on track – if not overnight, incrementally,” the Indian envoy said. “India is ready to work towards this end. However, such progress can be achieved only on purely independent bilateral considerations not influenced by either country’s relationship with any third country.”

He said: “any interference [in internal affairs] is totally unwelcomed.”

The ambassador argued that Turkey and India need to achieve “mutual understanding of political-security issues, especially sensitivity on issues of core concern to either side [which] lies at the root of the development of relations.”

“Once we have the right political environment, we could make the most of the post-COVID-19 pandemic opportunities by reimagining and reconfiguring our partnership,” he said.

“Let us recognize this big picture in our bilateral ties and embark on an urgent course correction. It is only then India and Turkey can realize their full potential as natural partners in the 21st century.”

GASAM head Demir, for his part, said if relations between Ankara and New Delhi can be developed in the framework of national and international interests it will be profitable for both.

He underlined that an independent policy within the framework of democratic rule of law is needed to strengthen the current bilateral relations.