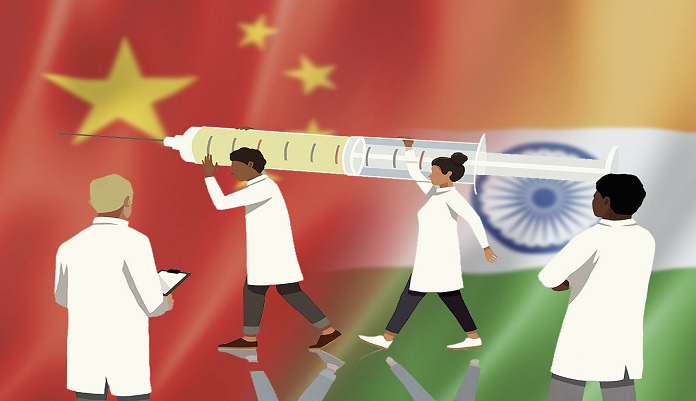 January 2021 marked a year since the Covid-19 outbreak, which saw the entire world reel under huge mortality, lockdowns and economic downturns. The past year also witnessed a long wait for a vaccine to combat the Covid-19 so that the first steps towards normalcy could be taken. With many countries rolling out vaccines to its frontline medical workers around the world, India began its own inoculation drive on January 16, 2021. Slated to be one of the largest in the world, aiming to cover its entire population in the coming months, what made more news was what came to be termed as India’s Vaccine Diplomacy. Within days of its own inoculation programme, India began providing the shipments of Covid-19 vaccines to other countries in its immediate neighbourhood as well as other distant countries.

The Covid-19 induced pandemic and the resulting economic downturn has further widened the rift between the rich and the poor nations. With many richer nations buying bulk of the vaccines as has been noted by the World Health organization (WHO), a way was opened for countries like India and China, with their large pharmaceutical infrastructure to fill in the gaps, especially in relation to the poorer countries.

The first beneficiaries of India’s vaccine diplomacy, a programme termed as Vaccine Maitri,  were the immediate neighbours- Maldives, Bhutan, Nepal and Bangladesh, who have already received the vaccine consignments, while supplies to Sri Lanka and Afghanistan are slated to commence soon. Nepal, Bangladesh, Bhutan and Maldives have received India’s Covid-19 vaccines under grant assistance in sync with its ‘Neighbourhood First’ policy. At home, it has already rolled out a massive vaccination drive under which two vaccines, Covishield and Covaxin are being administered to frontline health workers across India.  The vaccines exported so far have been manufactured by the Serum Institute of India Ltd., the world’s biggest vaccine manufacturer by volume. It is currently producing millions of doses of the shot developed by Oxford University and AstraZeneca. Spreading its wings over the vaccine diplomacy, India, as the largest vaccine producing country of the world, aims to gradually supply vaccines to the COVAX facility of the World Health Organisation and undertake contractual supplies to various other countries in a phased manner. COVAX is the global initiative to ensure rapid and equitable access to Covid19 vaccines to all countries, irrespective of income level.

On its part, China too successfully struck deals with emerging economies to conduct clinical trials for a vaccine developed by Chinese firm Sinovac as well as helping to build vaccine production facilities in some of these countries. Experts believe that such a move by China, especially in the countries of southeast Asia may help Beijing to mend its relations with Indonesia, the Philippines and Vietnam which had earlier soured due to the conflicts in the South China Sea.

As the scope of the countries receiving vaccine doses from India increased, many segments in the media have pointed out the vaccine drive as a ploy to garner more influence in the immediate region and beyond. Next in line for the vaccines are the BRICS nations, Brazil and South Africa.

With both India and China, given their large pharmaceutical infrastructure and riling tensions at the Line of Actual Control (LAC), this vaccine diplomacy has fuelled an narrative of India making a headway in a pushback against years of China expanding its influence in the region. It is being argued by many, that the vaccine diplomacy is helping India to make inroads into countries, which are seen as important strategic partners of China, like Cambodia and to a certain extent, Nepal. Cambodia, China’s most important ally in southeast Asia has asked for 1 million vaccine doses from India after receiving a similar amount from Beijing.

On February 1, 2021, the Indian government proposed a budget outlay of Rs. 2,23,846 crore for health and well-being in 2021-2022, an increase of 137 percent from the previous year, and also earmarking Rs. 35,000 crore for Covid-19 vaccine in the upcoming fiscal. While presenting the budget, Indian Finance Minister also made it clear that the government is committed to providing more funds in order to contain the Coronavirus pandemic spread in the country and also provide a smooth drive for the vaccination scheme.

While with the Union budget giving a shot in the arm for India’s increased vaccine production and distribution, it will be a matter to see how India can sustain the inroads made by the vaccine diplomacy. While Vaccine- Maitri does help India to boost its image as a prime medical aid provider and donor in the midst of a pandemic, the real success can only be gauged through the manner in which it can be sustained for further assertions of India’s soft power.