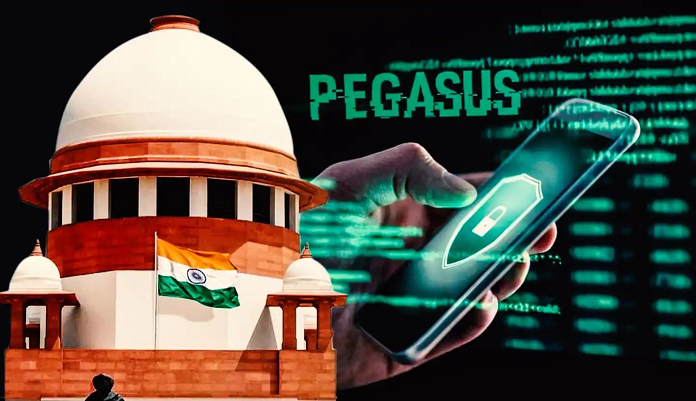 The Pegasus Project in India has shaken the political establishment. The matter of surveillance among peers and foes brought a lot of anger among parliamentarians adjourning the House during the debate twice in a single day. There were widespread public and political parties’ demonstrations demanding answers from the government on the kind of democracy in practise without accountability.

In an unpresented move this week, Indian Supreme Court appointed a three-member committee to investigate Pegasus spyware procurement and use to hack Phones of 300 Members of Parliament, Journalist, Social activist and opposition leaders following multiple petitions seeking probe into allegations of illegal surveillance. The revelation on the spyware have raised questions if the Indian government was illegally monitoring its critics and even ministers keeping them under surveillance. The Indian government has called this allegation highly sensational global conspiracy maintaining it could not reveal any information on the usage of Pegasus because of national security issue.

The targets’ phone numbers were on a database believed to be of interest to clients of Israeli firm NSO. Indian news and opinion website The Wire and The Indian Express newspaper were among the 16 international media outlets which investigated the leaked list and the use of Pegasus spyware around the world. NSO has denied any wrongdoing and claim, the software was intended for tracking criminals and terrorists and was only sold to military, law enforcement and intelligence agencies from countries with good human rights records. Israeli Ambassador to India told the press, his country does not allow companies like NSO Group, the maker of Pegasus spyware to sell their products to non-governmental actors and described the allegations on its misuses as India’s internal matter.

The Pegasus Project revealed 500,000 numbers among others 200 verified Indian mobile numbers in a leaked database of likely surveillance targets listed by government clients of the NSO Group. It sparked widespread protests in India and opposition leaders took up the matter in parliament.  Pegasus is spyware of military grade surveillance tool sold by Israeli company NSO Group to vetted governments around the world. Venkatesh Nayak of Commonwealth Human Rights Initiative filed a request for information about the incident from the Prime Minister Office, Home Ministry and the Ministry of Communication, Electronics and Information Technology (MEITY). The complaint was sent to Computer Emergency Response Team, the government’s official body responsible for monitoring such hacking. That Whatsapp had informed of Pegasus attack but in Lower House of Parliament it was claimed there is no factual basis to such claims especially since a minister had provided the information with the exception of national security.

Several of the 300 mentioned in data leak filed a plea seeking answers from the government and an inquiry headed by a sitting or retired judge of Supreme Court. The Petition was heard and the government filed a limited affidavit claiming the allegations were baseless and such matters cannot be made into a public debate. The court observed it did not compel the government to disclose information about security but only wanted information on whether phones of people had been intercepted. However, the Judge observed, it is settled position in law that matters pertaining to National Security is limited however does not mean that the state gets a Free Pass every time the specter of “national security” is raised. As early as 1975, five judge bench in Raj Narian held, ’To cover with veil of secrecy the common routine business is not interest of public. Such secrecy seldom be legitimately desired. It is generally desired for purpose of parties and politics as personal self-interest or bureaucratic routine. The responsibility of the officials to explain and justify their acts is chief safeguard against oppression and corruption. Calling it, a historic decision” and “a watershed in the history of the court”. Former President Supreme Court Bar Association (SCBA) Dushyant Dave said the Supreme Court stood by the citizens to protect their fundamental right to privacy. He further says,’ The Court is seriously worried about infringement of Constitutional guarantees of citizens and particularly right to privacy. … the Supreme Court rightly said that the right to privacy is directly infringed when there is surveillance or spying by government agency or any other spying agency.

In the 46-page judgement, Chief Justice of India, N V Ramana appointed a committee under its supervision to “probe the falseity and discover (the) truth”. The Honourable Judge noted the alleged violation of privacy needed to be examined as it affects the rights and freedom of people adding such technology may also have” chilling effect” on the press freedom in India. The implication on privacy, freedom of speech and media could not be brushed aside in the absence of detailed affidavit by the government which cited national security concerns. The Supreme Court ordered the setup of a three-member committee to look into the revelations and its functioning and delineated the task with two broad references to enquire, investigate and determine seven objectives and to make recommendations.

The Supreme Court expects a report and recommendation in 8 weeks,

Internationally, Pegasus database exploits is a major international scandal. Mexico one of the first client of the spyware, at least 50 persons around President Andres and others were spied on. Breaking ranks, the first lady called on the Attorney General to investigate the revelations. The Director of criminal investigation agency was investigated and found to have ordered the spyware, he fled to Israel to escape embezzlement, torture and forced disappearances. There was shock in France when telephone numbers including the President Macron’s was discovered to have been compromised, he urgent chaired national security meeting to discuss the matter ordering multiple investigations later to adjust security protocol. Meanwhile NSO denied targeting Macron, research suggested Morocco had interests and macron senior team was selected. A clarification was asked from the Moroccan ambassador, he categorically rejected the claim and denied any involvement of his government. In Hungary investigative journalist and a group of independent media owners were targeted. The far-right government denied saying it wasn’t aware and denying illegal surveillance. However, the opposition and some parliamentarians called on a national security committee for an extraordinary meeting although it was blocked from convening. In the UK, it was revealed 400 telephone numbers were in the leaked database. Potential client for snooping in UK was suggested to be an ally of UAE, with both sides keeping silent. The Israeli Defence Minister was forced to defend the licence issued to NSO Group claiming the buying countries must meet terms of use which are for criminal and terrorism investigations. It has since decided to set up a multiparty agency task force to investigate if a policy change is required into cyber exports. It claims, buying countries have all the power to declare anyone dissident and a target which applies to Israel too. NSO denied the database has anything to do with customers, it has no visibility into client’s activities using the spyware. The company latest issued statement said, the recent planned media campaign in complete disregard for truth, it will no longer respond to media queries and not play along the vicious slanderous campaign. The data base is not a list of target or potential ones and not related to the group and any claim on any name in the list is erroneous and false. Meanwhile, Israeli take pride in their technological powers but Pegasus exposes the negative side of technology propelled for commercial purposes and very dangerous for democracy and its functioning actors, institutions, media and opposition. It also raises questions on the pure commercial proposition without accountability of standards set up industry for safety and security of ordinary citizens.