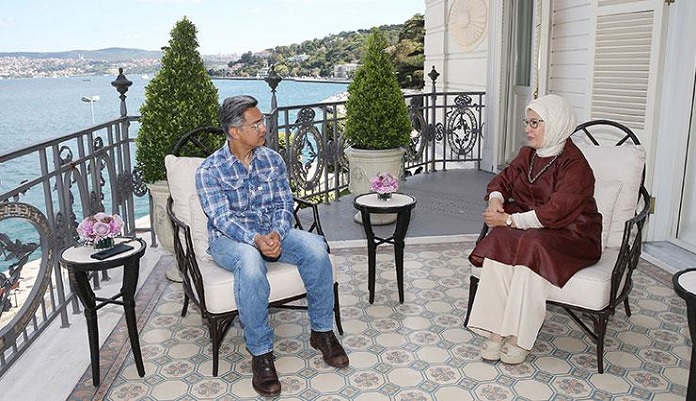 The present year, 2020, is proving to be a rather difficult year for the world. More and more countries, around the world are being engulfed with protests and strife,  coinciding with the continuing rampage of the Covid19 pandemic. At this time, the relationship between India and Turkey, seem to be going through a low, if the vitriol on the various social media platforms  are taken into account. The various social media platforms in India, went abuzz on the recent travel of Indian actor Aamir Khan to Turkey, to shoot his upcoming movie. His meeting with the First Lady of Turkey, pushed the simmering abhorrence, already a marker of Indian social media platforms to an undignified tizzy.

A present in Turmoil

The year 2019, saw India and Turkey take regressive steps in their bilateral relation. In August 2019, India revoked the special status of the Indian state of Jammu and Kashmir. While the move did attract much international attention, India maintained the revocation of the special status, to be a constitutional amendment, and therefore, an internal issue to which the international outrage was termed to be unwarranted.

During his speech at 2019 UN General Assembly, President Erdogan of Turkey, highlighted global injustice, and urged the world to take action in Kashmir. Much to India’s dismay, he asserted that the Kashmir issue has not got enough international attention and should be resolved through dialogue on the basis of justice and equity, and not through collision. He had earlier offered to be a mediator between India and Pakistan, in resolving the Kashmir issue. This had been a major irritant for India, which has for decades maintained that Kashmir is a bilateral issue and will be solved without any intervention of a third country.

The initial days of 2020, saw the major Indian cities riled with protests against the Citizenship Amendment Act (CAA). This new law provides for citizenship to six non-Muslim communities from Afghanistan, Bangladesh and Pakistan. Many members under the aegis of the Organization of Islamic Cooperation (OIC) has called on India to ‘ensure the safety of Muslim minority’ after the passage of the CAA, but also asked for the ‘protection of Islamic holy places in India’ after the Babri Masjid verdict. Many in the international community saw the events unfolding in India to have a serious implication on peace and security across the region. While the CAA protests continued unabated in India, till the situation of mass-protests becoming untenable due to the pandemic, it is expected that the OIC, particularly led by countries like Malaysia and Turkey, may point it out on the international forum, further escalating the tensions.

Coming back to the debate on Aamir Khan’s visit to Turkey, it needs to be remembered that, for decades Indian films and Bollywood in particular have been a great source of India’s cultural diplomacy. It is widely known that Bollywood films and their stars, especially the ‘the Khans’ have a huge fan-following the world over. Their success can be gauged from their popularity among the foreigners and not only within the large sections of Indian diaspora abroad.

Aamir Khan remains one of the most prized actors from India, with his movies mesmerizing audiences around the world. Like many of the other Bollywood movies, his movies are also at times, shot out of India, and are therefore, a big avenue to widen the market and businesses at the places where they are shot, along with helping in popularising India.

It is unfortunate that artistes, or non-governmental agencies are being dragged in issues of political bearing. The entire debate thus, seems like an unnecessary noise, because the recent differences that have emerged between India and Turkey, are of a political nature, which needs to be resolved at the political level, through mutual diplomacy.  To target, people to people connections, and non-political entities seem futile, as relations in the present world can only flourish when there is a greater cultural connect between people, and cinema and Bollywood has always proven itself to be extremely efficient in that respect.  They have been big worthy cultural ambassadors for India.

The Past and Present

Regardless of the current geo-political issues and concerns, India and Turkey share a historical connection, transcending the barriers of centuries. It is a relationship that dates since the past centuries- from the time of the rule of the Ottomans.

In 2017 President Erdogan visited India bringing along with him, a large entourage of business leaders from Turkey. The recent events regarding Kashmir and the debate on CAA and NRC may have brought the two countries at logger-heads with each other. It is also known that the real disdain between the two countries has been the question of Pakistan. While Turkey has a cordial relation with Pakistan, India has an uncomfortable relation with its immediate western neighbour. But, being mature democracies, that India and Turkey, as both are, they should, keep their differences aside, and maintain a cordial relation with each other. And there are many avenues on which a stable and fruitful bilateral relation can be maintained.

A big step in this direction has been taken by India. The Hindustan Shipyard Limited (HSL) has decided to go ahead with Turkish shipyard partner M/S Anadolu shipyard after signing a contract with them for technical collaboration for enabling the shipyard to build five fleet support ships. The total initial estimated project cost is about Rs. 10, 000 crore for the 45,000 ton fleet support ships (FSS) for the Indian Navy.

Though tourism has taken a beating because of the pandemic, but it remains a viable option of contact between the two countries. Indian tourists  usually flock to Turkey in droves each year. according to estimates, in  2019, Turkey emerged as a favoured destination for the extravagant Indian weddings. The country hosted 32 million-dollar Indian weddings in 2019, which is a record.

India and Turkey, still seem to find it difficult to find common grounds for association, among the bright spots of trade, tourism and people to people contact. And this cannot change, unless and until non-political entities, are not mired into debates and controversies, which are political in nature.

The Gallipoli Campaign and the story of the unknown Indian soldiers